So we’ve now spent a full day and a half in Portland and I’m in no way ready to leave!  I wish we had two weeks here instead of two days.  True to form, we’ve mostly been eating our way through the city – would you expect anything less?  But later on today our plan is to say goodbye to Portland (after hitting up a few more food carts) and then we’re heading south for the second leg of our Oregonian adventure – the Oregon Coast.

As for Portland – yes, we could totally see ourselves living here.  Although every time I say that to someone local, they bring up the weather as a big factor.  And to be honest, I’m not sure I could handle cloudy rainy days being the norm.  It might be a tad depressing.  But leaving the rain out of the equation, this city has a great vibe to me and I could totally see myself thriving in this type of environment.  There seems to be a spirit here – of creativity, idealism, optimism and a joy of life.  The food so far has been OUTSTANDING – I mean, a couple of the best meals I’ve maybe had EVER.  For real.  The city feels pretty new – with a sort of industrial, modern design thing going – but then there are all these charming little houses all over – like little cozy hobbit houses. We want one.  And it’s pretty quiet – and there are cool art installations all over and a cool free public transportation system and trees!  Lots of green and parks and trees!  I love that.

But now – onto the most important thing… food.

Actually – before I go there, here is my photo from Friday before we left.  I was apartment hunting in Brooklyn with Lyon – our awesome broker. 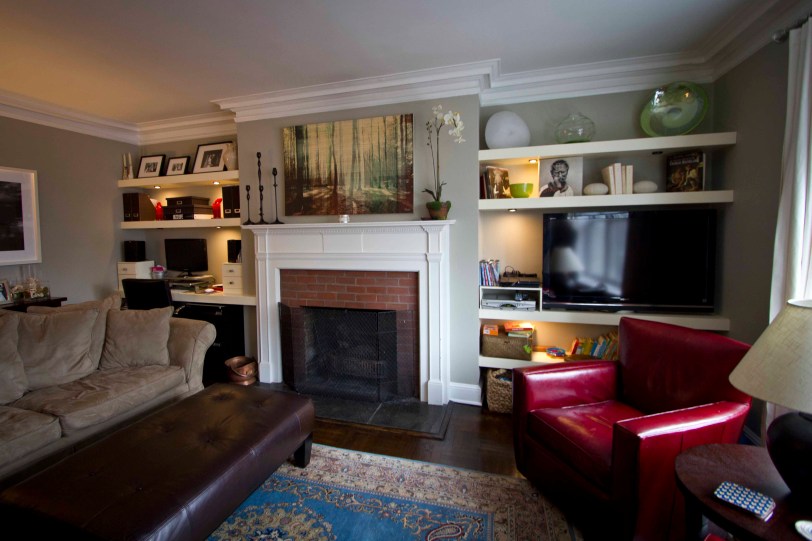 So yeah, this apartment was SICK!  Gorgeous doesn’t even begin to explain it.  It is a Co-op – and the owners will only agree to a one-year lease and it’s a little out of our price range… so it’s not happening.  But man… this place feels like a real classy grown-up apartment.  You know?  Oh well.  Ours will be way cooler when we find one. 🙂

Ok – so now onto Portland food.

The first meal we had in Portland was at a place called Pok Pok on SE Division Street. 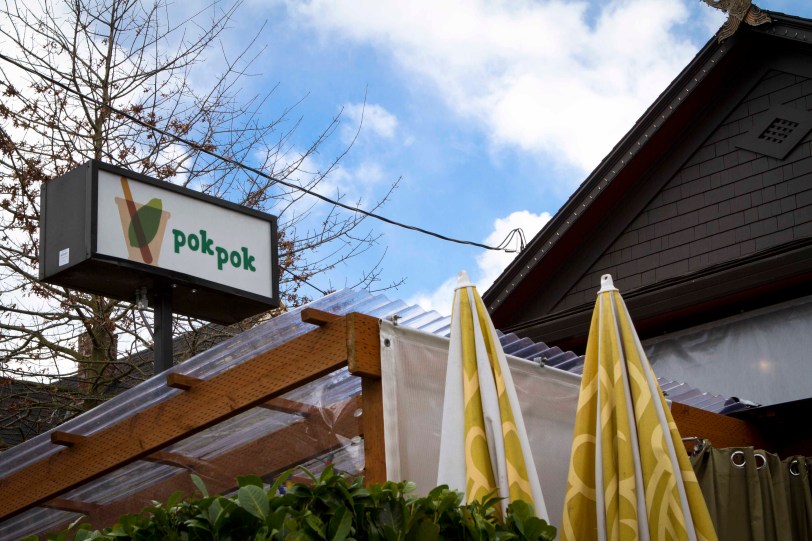 It was recommended to us by a couple people – our foodie friends Kelly & Val said it was the best meal they’ve ever had…EVER.  So – we dropped our stuff off at the hotel and headed straight there!  No dilly dallying when it comes to food.  Before we went to the restaurant, I snapped Photo #358. 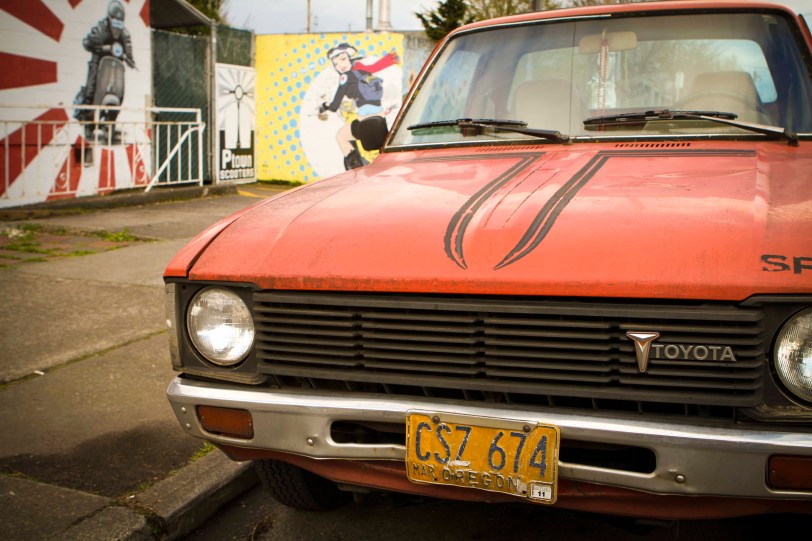 Pok Pok serves up Southeast Asian pub/street fare – mostly from the North and Northeast of Thailand.  We ordered a specialty of the house – Spicy Vietnamese Fish Sauce Wings, which seriously rocked our world.  This dish was named as one of the ten best restaurant dishes by Food & Wine Magazine in 2007… well-deserved.  The coating of caramelized fish sauce and palm sugar created a “candied” texture to the wings.  Ridic. 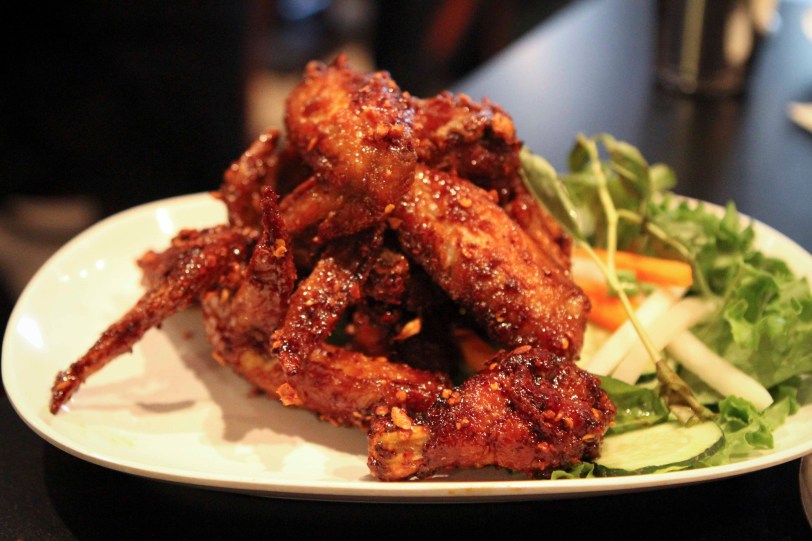 We also got our pork on with an order of pork loin satay skewers as well as green papaya salad with jasmine rice and sweet shredded Carlton Farms pork, fried shallots and cilantro.  This dish was actually our favorite of the three. 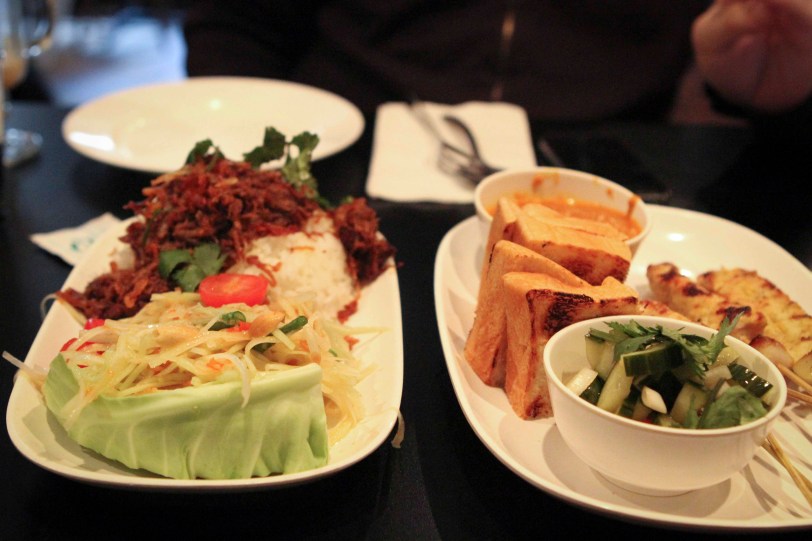 After lunch/dinner (it was five-thirty Portland time, but for us, it was eight-thirty NY time), we stopped at the little food cart pod across the street.  I couldn’t eat a thing – but we stopped at the pie spot and picked up two mini pies to take home for dessert – we would inevitably get snacky later.  The butter pecan pie was the perfect sweet ending to our first half-day in Portland before we crashed at around ten o’clock after being up for twenty-one hours. 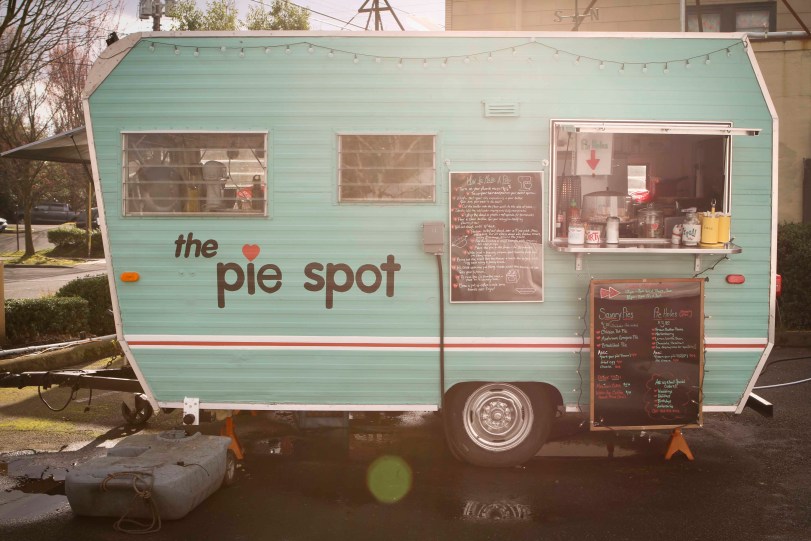 Yesterday – day two – was even more delicious.  We woke up, did a little work in our awesome funky suite-style hotel room at the Inn at Northrup Station (we totally love this place and don’t want to leave – it’s Austin Powers meets Willy Wonka).  Here is a picture of our hallway: 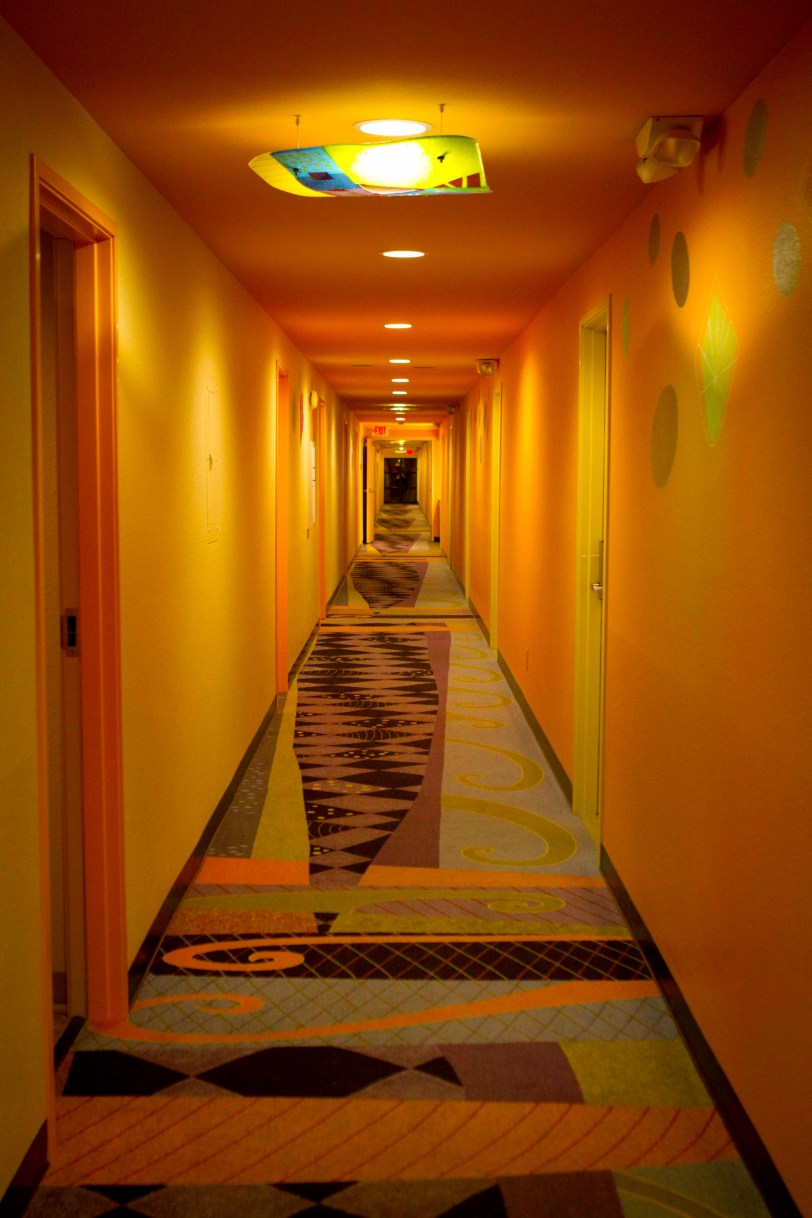 Then, the foodie fun continued.

We had noon brunch reservations for a restaurant called Beast. 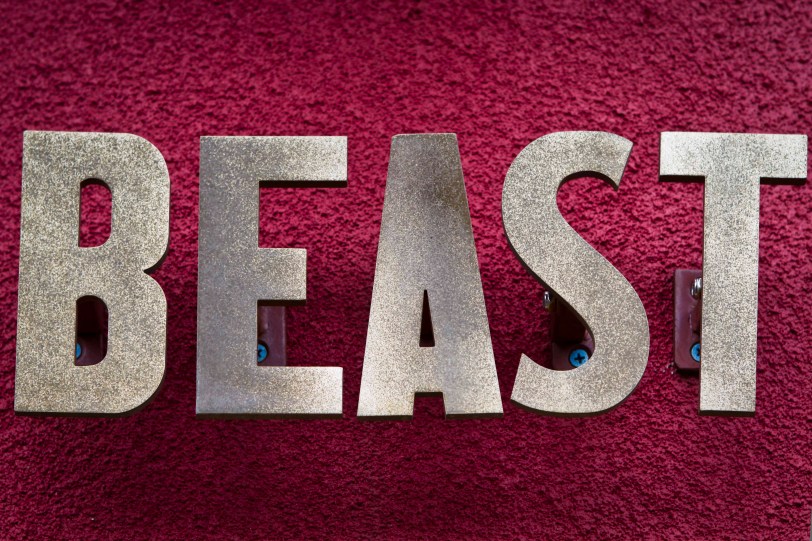 While we stood out front of the restaurant, eagerly awaiting our noon seating, I took photo 359 – our reflection in the Beast window. 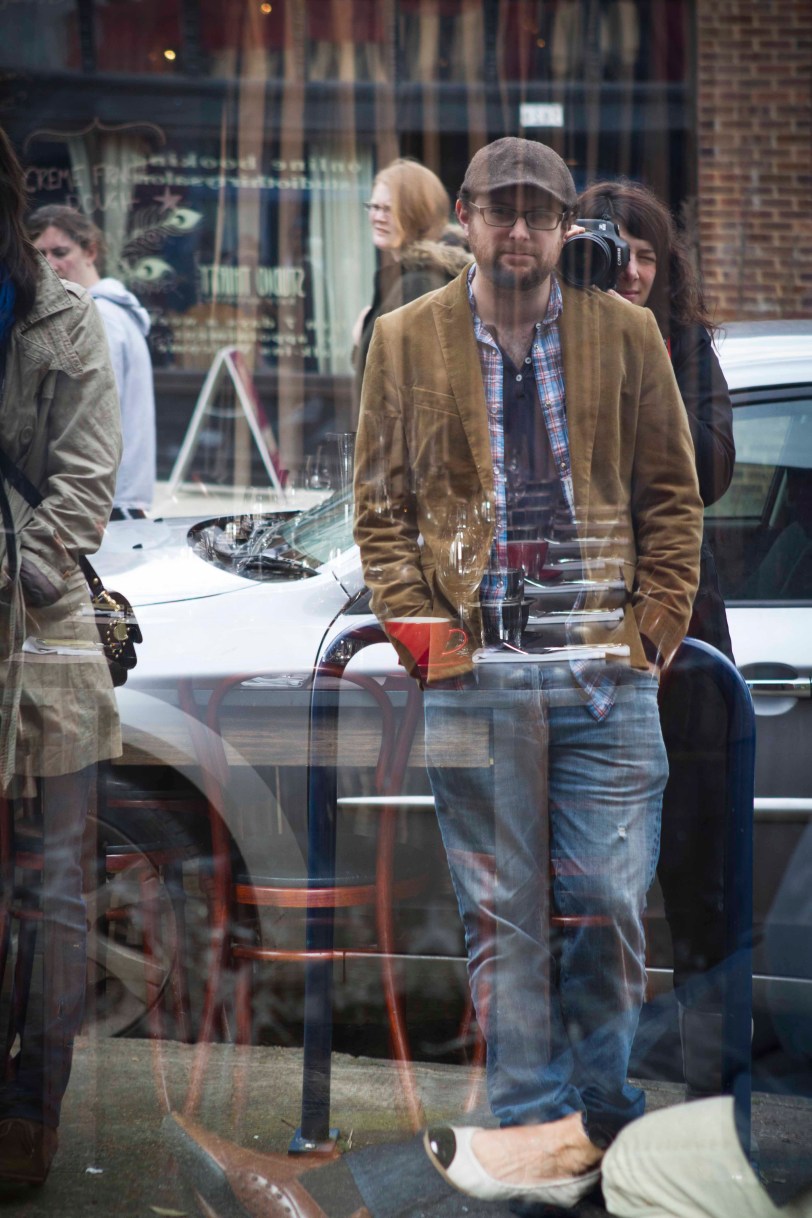 Beast offers a four-course prix-fix brunch – two seatings – Sunday only.  We sat at a small communal table with six other diners and enjoyed one of the best meals of our lives.  Shout out to Amie and Rob for the recommendation.  Here is the menu – complete with wine pairings: 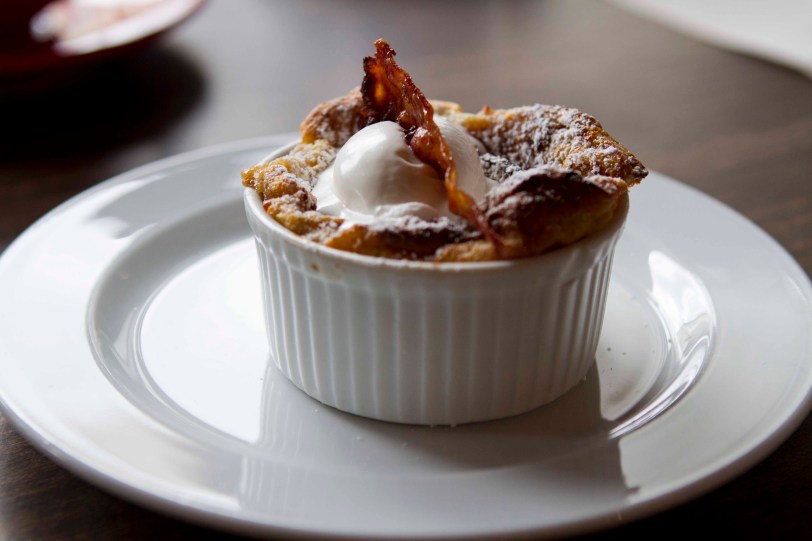 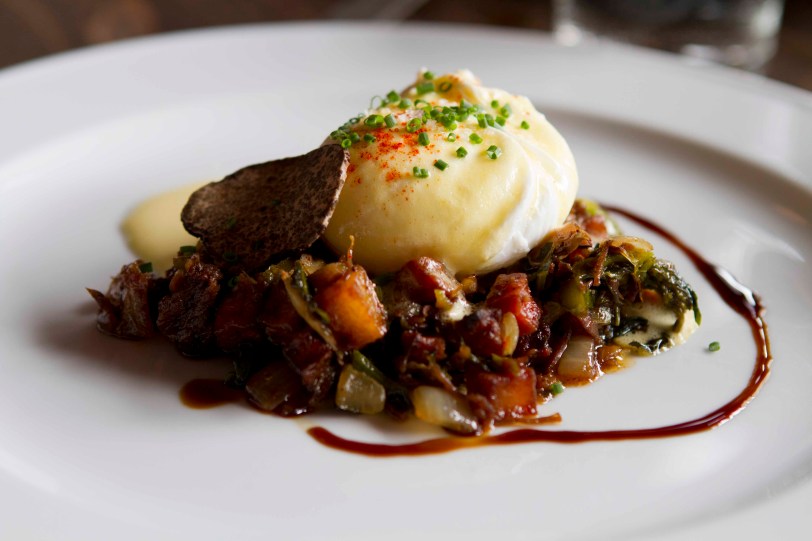 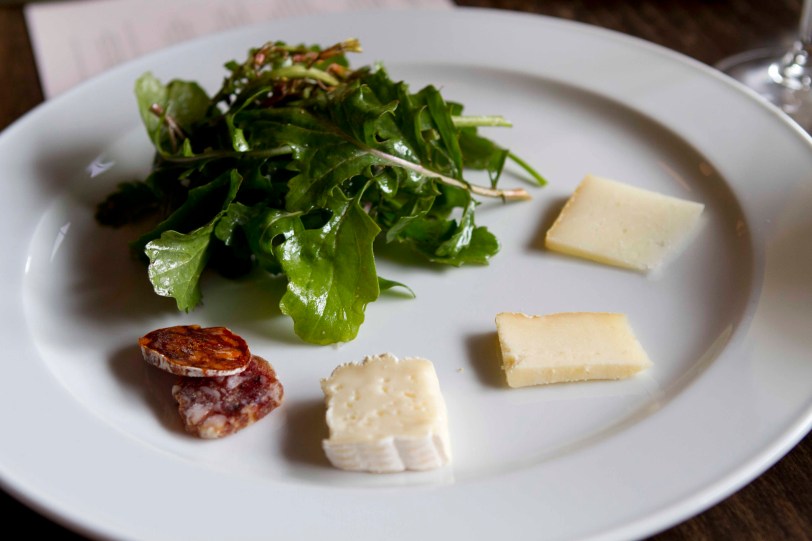 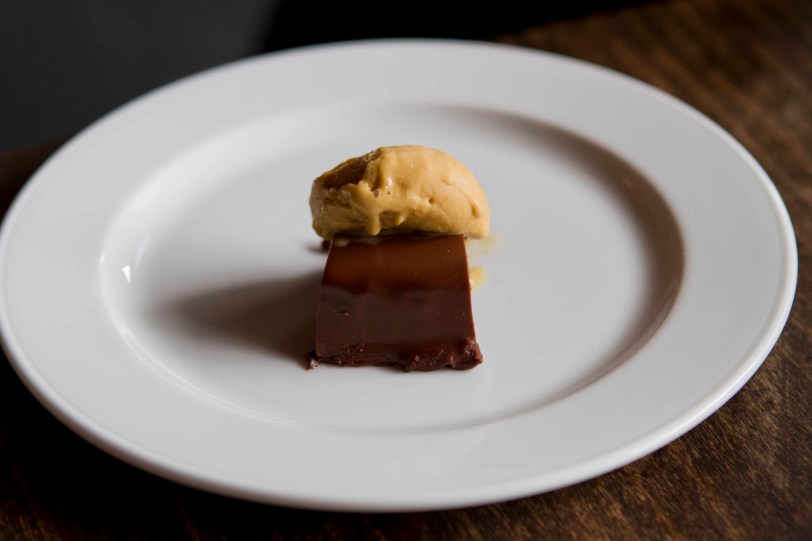 Ok – so this meal… UTTER PERFECTION.  I’m serious.  The first bite of that delectably light, creamy, eggy clafoutis (with BACON) and tart little pieces of rhubarb started the meal off with “ooooh’s” and “ahhhhh’s” and proclamations of potential weeping.  The Beast Hash was the main event with rich, savory, earthy flavors.  The perfectly poached egg, when broken, spilled its bright yellow yolk, mixing wonderfully with the roasted veggies and moist, flavorful lamb.  A total knock-out of a dish.  Then there was cheese.  Can you imagine how blissed out I was??  The three cheeses were all delicious, with the Everona – a sheep’s milk cheese from the Piedmont region of Virginia – being my favorite of the three.  The peppery, nutty arugula went wonderfully well with the cheeses, freshening up our palettes after the rich Beast Hash.  And finally – the dessert.  I’m not a huge dessert person, but this chocolate truffle cake was wonderful… and the Tawny… delicious.  Though I must say that the cheese freak in me was craving a nice piece of blue to go along with the port.  Overall the pacing, the portions, the company (a couple who just moved to Portland from Australia and their mother) and obviously the food will make this meal go down in nellsdish history as one of my favorite restaurant experiences ever!!  I’m drooling again just writing about it now.  Amazing.

After our meal at Beast, our heads were in the clouds.  We were giddy, sated and in love with Portland.  We took a drive out to a mansion in the Northwest part of the city – a beautiful drive.  We looked at gorgeous houses along the way and then toured the mansion and walked around the grounds a little.  Later on (after digestion), we hit up some food carts for dinner: 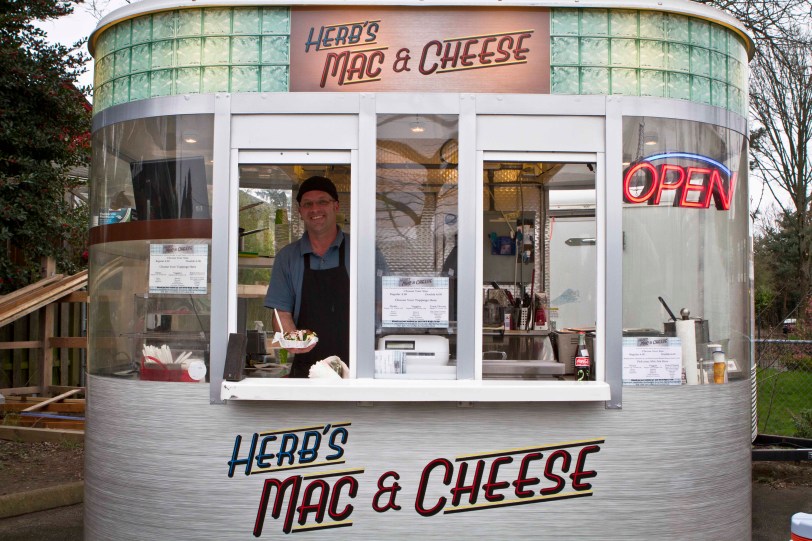 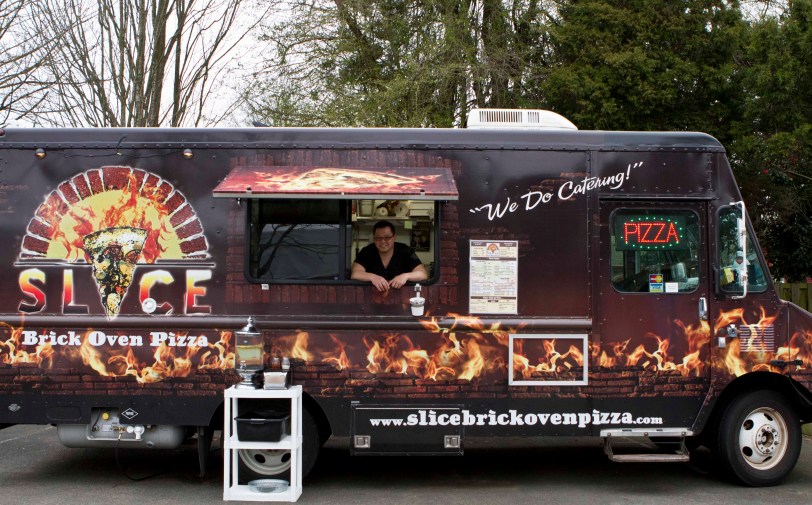 And our favorite of all carts thus far – the Koi Fusion Truck.  The asian tacos were so amazing here, I forgot to even take a picture.

At this point, we were stuffed… I know, we’re pigs… but I had to experience this rich food scene in only two days!  You gotta do what you gotta do.  Right?

Whew.  Ok – that’s definitely enough for one day.  Now we’re off for the coast after a little Portland shopping.  I’ll catch up with you in the next couple days!