So I seriously have four half-posts written right now.  That’s what I’ve been working on over the last month and a half. I’m obviously still having a tough time with this ‘balance’ thing.  Turns out staying home with a one-year old is a full-time job plus.  Who knew?  I kid – but for real… I’m still finding it rather difficult to accomplish anything that isn’t Theo-oriented.  I have managed to squeak out the normal daily stuff – like laundry and cooking dinner (sometimes) and paying bills and ordering groceries (thank you Fresh Direct).  I also started working out with a trainer twice a week to try to get rid of this stupid remaining belly fat that is just lingering around my mid-section.  Stubborn terrible fat.  I hear maybe it’ll magically melt away once I stop nursing – but who knows.  In the meantime, I’m torturing myself with 7:15 am workouts in Fort Greene Park on Mondays and Thursdays.  Though, truth be told, I actually kind of like the torture.  My trainer is nice and I get excited when I accomplish things that initially sound impossible.  It’s good for my psyche.

Blogging still remains my biggest challenge.  My style has always been to just sit and write what’s on my mind.  Now it is difficult, because I always get interrupted.  And later when I go back to my post-in-progress, things have changed or I’m just not in the mood to write about what I was writing about.   As I write this (Friday night), I’m sitting on my friend’s couch babysitting her sleeping one-year old so she and her hubby can go out on a date.  I should do this once a week JUST for the blogging time!  (and to get some free babysitting in return… yes please!).

Meanwhile, I had a minor breakdown over the phone to my mom last week.  Life has been a bit stressful the past couple months.  Actually… before I go on, let me preface this by saying that my life is totally charmed and I’m extremely grateful.  Any bitching I do is done knowing that I have it REALLY good and all the things that truly matter in my life are AOK.  I have two close friends who’s mothers passed away recently and I cannot even imagine how that must rock you to your core.  I have a friend who suffered two strokes out of the blue – he’s in his thirties.  He thought he was going to die.  Thankfully he only has minor brain damage relating to his vision – but JEEZ.  I also found out last week that my really excellent primary care physician drowned back in January while on vacation with his wife in Costa Rica.   He was in his 50’s and healthy and fit.  I got the letter in the mail.  How fucked up is that??  So yes – this all puts my problems in perspective – and it also terrifies me how fragile everything is.

But lets not dive into that hole of despair right now.  We’ll just talk about my silly worries instead.  Theo’s sleep/napping has been a stupidly consuming issue over the last few weeks but I believe we are making some progress and getting back on track. Thus, I’ll spare you the details (that’s one of those half-posts I started and now don’t need to finish).  He slept until 6:30 am on Friday – it was pretty much the best day of our lives.  I’ll leave it at that.

We took a two-week trip to California in April.  One week to visit family in San Diego and the second week for a shoot in LA.  Theo decided to get all four of his top middle teeth midway through the trip.  It made things rather difficult.  LA was hard.  Adam was working.  Theo and I were out of our comfort zone but we made it work as well as we could.  I drove around the Hollywood hills as Theo took car naps (the only naps he’d take).  The highlight was spending the day on set with Adam on the New York City backlot at Universal Studios where he was directing a spot for USA Network!  Theo had a ball – he loved all the action and the attention.  The tour trams drove by all day – visitors taking pictures of the production in progress.  I felt so cool.  Twenty-six years ago, I was on one of those trams – watching in awe as Hollywood revealed its secrets.  Little eight-year old Nell would never have imagined that one day she’d be standing there on the set of a real shoot!

Here’s an iphone shot from the 40’s era shoot: 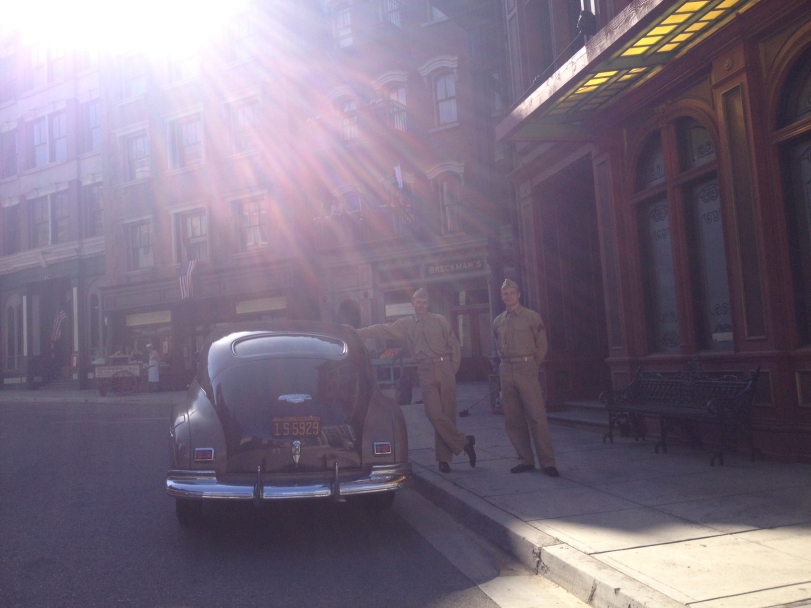 Then there’s our living situation.  I mentioned a few months ago that as of July our rent is going up by $500 a month.  Yes – for real.  And yes, it’s legal.  I’ve looked it up.  It really sucks big time.  So – we’ve been anticipating this issue for months now and after some research (and a little following of our friends), we decided that we were going to buy a house in Maplewood, NJ.  Interest rates are down and housing prices seem to be on the rise so it seemed like a good time to throw our hat in the ring and buy something!  And Maplewood seems to be a fantastic place to raise kids.  It’s a thirty-five minute direct commute into Manhattan.  It’s got an adorable, quaint downtown and tons of parks.  The houses are charming and old and have lots of character.  And the people there seem to have so much community pride.  There are good vibes there.  Happy vibes.  It’s a happy place.

Neither of us have ever bought anything major before.  It’s scary and exciting and totally overwhelming.  I’ve been giving myself a crash course in mortgages and managed to learn a lot in the span of three months (another thing taking up much of my little free time).  Our friends bought a house in Maplewood in October.  They were smart.  As of February/March, the market totally exploded and things got completely wacky out of control.   Every good house that comes on the market is getting multiple offers and causing bidding wars.  Houses are selling at $40 and 50K over asking price – and to people paying CASH!  CASH!  I mean – what??  A cute rental that came up the other day is even causing a bidding war – FOR A RENTAL!  So yeah… now the house thing is beginning to feel a bit out of reach – at least for the time being.  Our realtor expects things might chill out a bit after the summer – but who knows?  I’m feeling like we are in a state of limbo.  I mean, I’d stay in Brooklyn for another couple years – Brooklyn is amazing!  But it is also hot! hot! hot!  And rents are ballooning out of control here.  Plus you almost always have to pay a broker fee (in the thousands) when you sign a new lease in New York (as well as in Maplewood I’ve learned) so moving to a new rental in either place will be a pricy undertaking.  So yeah.  That’s that conundrum.  I guess we’ll hang out in the firehouse for another couple months while we figure it out and pay the extra $500 a month.  Yuck.  I mean, I’m sure everything will work out.  It always does.  But for now – the path is not exactly clear.

Finally – I’m suffering from some stay-at-home mommy frustration.  I mean – I’m so glad to be home with Theo and I wouldn’t want to give it up – but I desperately need to make just a little more time for myself.  Adam and I went out on a date last weekend while my parents were in town.  We ended up eating dinner at Olea, which was totally delish.  They have one of my all-time favorite dishes there… the Spanish ‘Pitza’.  It’s a pita with quince paste, Manchego cheese, toasted garlic and crushed red pepper.  It’s such a perfect blend of salty/sweet/spicy flavor.  Mmmmmm.  We got the last table at the restaurant – it was humming with an awesome energy.  I drank two margaritas and got a little silly.  I told the waiter he had a Brad Pitt thing going on (he totally did – unless it was just the margarita goggles).  He hugged me.  We all laughed!  I had so much freaking fun.

The next day I felt mildly depressed.  That fun, foodie, margarita-drinking Nell has been a little too MIA lately.  I care about food and restaurants and having fun!  I care about blogging and being productive and sharing my passions.  Theo’s now over a year old and I really need to figure out this balance thing and make some changes, however difficult it might be with finding the right babysitter or trying to save more for a down payment.  It is important.  I need to feed my passions.  I need to connect with the old Nell more.  I miss her.

So  yeah – that’s what’s going on with me these days.

There’s definitely lots of good stuff too.  Theo is cuter than ever.  I’m obsessed.  He’s babbling up a storm and he’s starting to walk.  He copies us now… in the morning when I wake up I do a big stretch and say “STRETCH!”.  And he puts his arms up and says “STETCH!”  It’s ridiculously adorable.  I took him to the farmers market on Saturday and we spent some time at the Cato Corner cheese table.  He tasted multiple samples of cheese and kept wanting more.  Even the super stinky runny Rappleree!  Oh – and he says the word “cheese” now (naturally one of his first words).  Though it sounds more like “chiz”.  My little cheese monkey.  I love it.

Oh yeah – and Adam’s writing a movie that stars Theo and takes place in our apartment.  We’re filming the first two weeks of June.  (Yes – that is coming up real fast and adding to my stress level as well – but it’s simultaneously super awesome.)  Stay tuned for more details.

Meanwhile, I’ve been trying to take more pictures lately – here are some of the latest gems:

Theo getting his haircut: 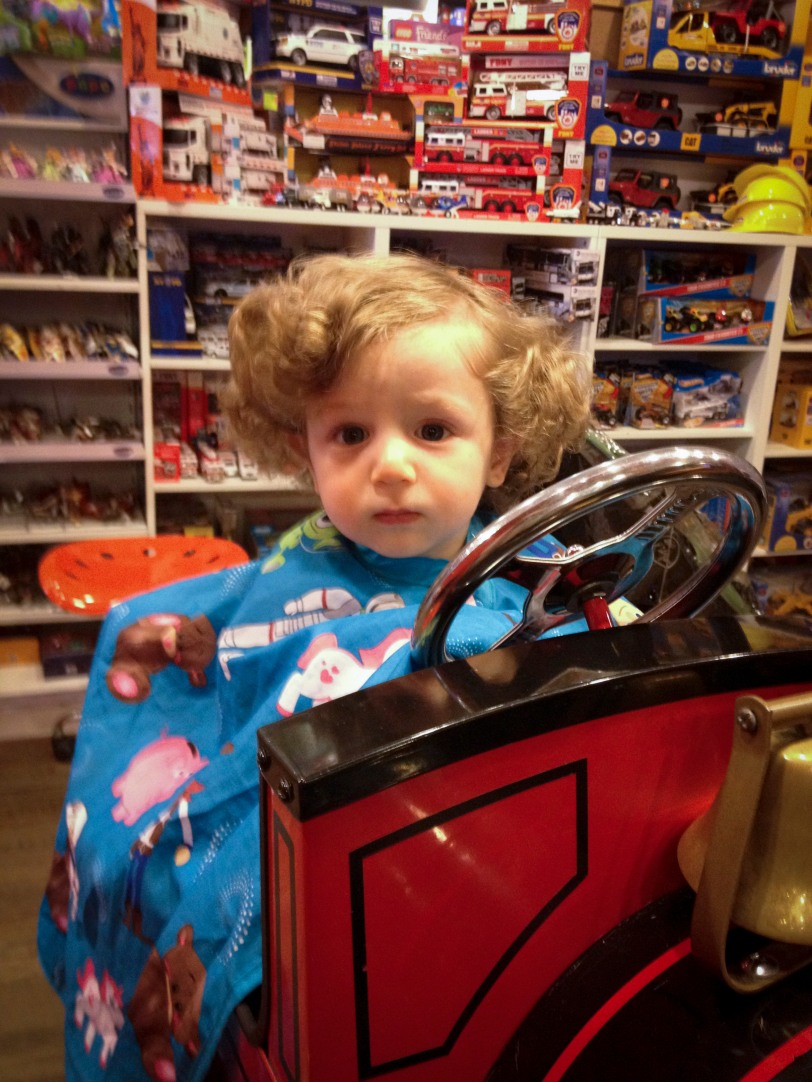 Theo & Daddy at Pier 5 in Brooklyn on Mother’s Day: 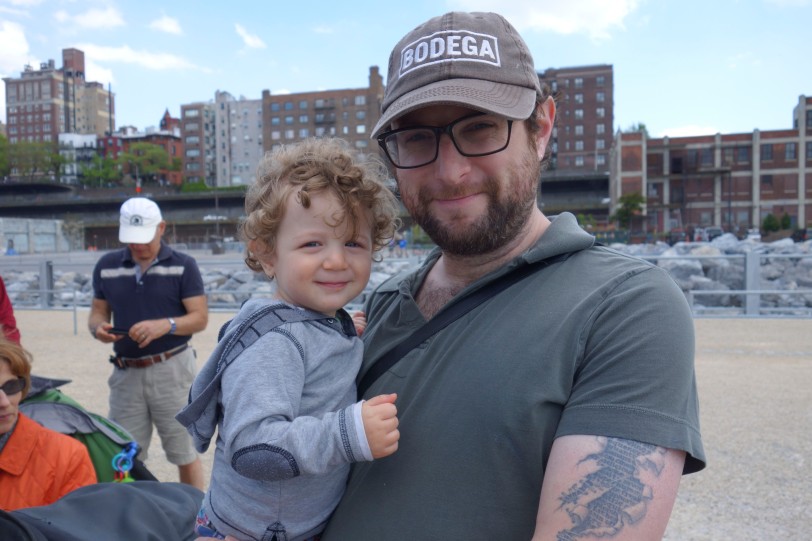 Theo trying to touch my camera lens with his dirty avocado/pea fingers… don’t think so buddy: 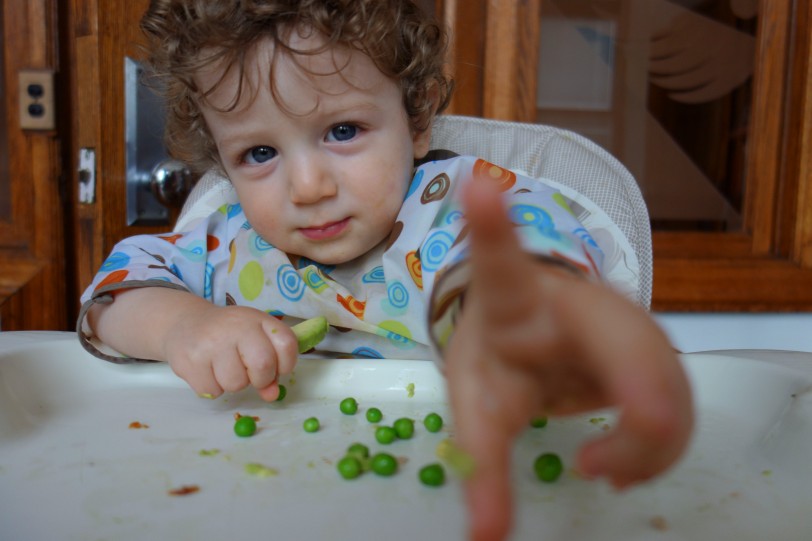 Theo flexing in the Bat Mobile: 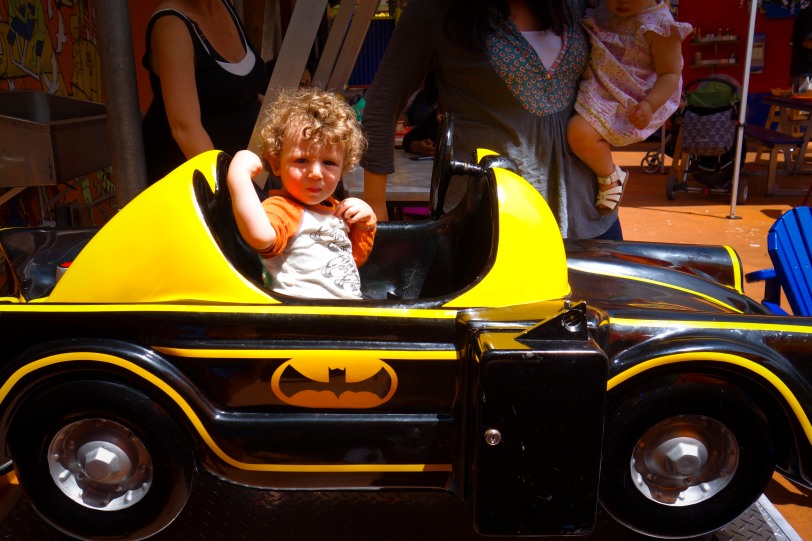 I will say right now that I will not let another month go by without blogging – but if for some reason, I can’t seem to find the time and it doesn’t happen, I’m forgiving myself.  I mean, shit.  This motherhood stuff is hard.  Life is busy and messy and complicated – and you just have to be kind to yourself – right?  I was chatting with Theo’s pediatrician the other day (he’s a wise Jewy dad kind of guy… also a total cheese person) and I was complaining about Theo’s mini naps and how I can’t get anything done.  He was like, “Duh – of course you can’t get anything done.  You have a one-year old.”  That made me feel better.  Thanks doc.