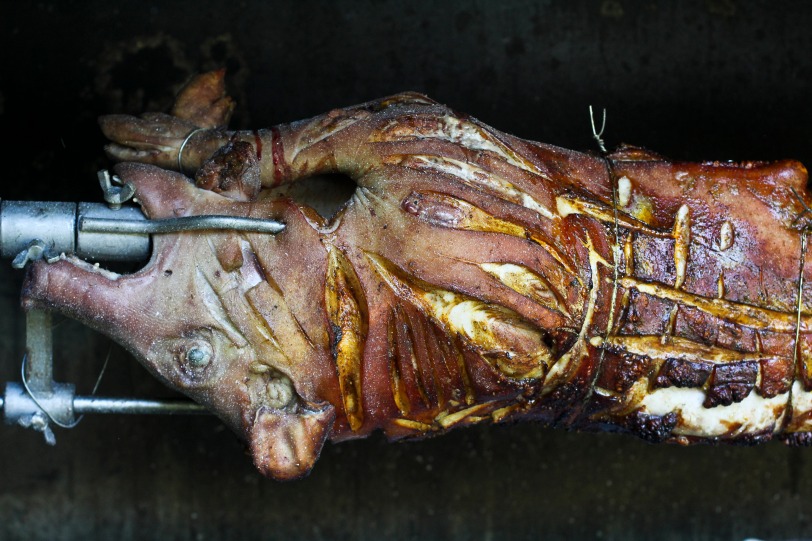 Please forgive me if this photo is offensive in any way… I’m specifically thinking of my sweet vegetarian sister-in-law who is probably completely grossed out by this – sorry Robin!  But, for all of you pork lovers… this little piggy is probably as fascinating and beautiful to you as it is to me.   Granted… the head bugs me out a bit – but I’m getting over it.

Saturday morning we left NYC bright and early for a train ride out to Redding, CT.  Our dear friends Harry & Becki live out in Redding in a beautiful, idyllic home in the woods.  In fact, Harry (the voiceover God) is a lead actor in Adam’s film Hello Lonesome, and his house was the setting for a third of the film.  At the 92YTribeca screening of Hello Lonesome, we got to talking and Harry & Becki decided they wanted to throw a pig roast party at their home in honor of our other dear friend (and casting director for Hello Lonesome) Brette’s birthday party.  So this past Saturday was the day.

When we arrived around one o’clock, the pig was already on the spit roasting away.  I was totally fascinated.  I’d never seen a whole pig being cooked before.   I was torn between feelings of horror, hunger, awe and pure curiosity.   The smell was smoky and enticing… the skin was getting all browned and crackly… but that head!!!  eek.  After showing off his piggy, Harry put the cover back on the grill-type-contraption and we amused ourselves for the next several hours before dinner was served.

I helped out in the kitchen by preparing my new favorite summer salad – the watermelon, feta, arugula salad from Ina Garten that I made for the Fourth of July and for Faye’s bridal shower.  Three times going now… that salad is a hit for sure!  When I was done prepping the salad ingredients, it was time for a little shooting!  Harry is a skilled hunter and marksman and has some targets set up in the woods of his back yard.  Several of us were interested in shooting, so he gave us each a lesson on proper gun handling, aiming and shooting.  It was a blast!

By around six-thirty, it was time for the feast to begin!  I’m telling you… I have never enjoyed pork so much in my life!  Maybe it was the slow-roasting cooking method, maybe it was Harry’s custom rub he used or his specialty homemade BBQ sauce,  or maybe it was because we were eating outside in a beautiful yard, surrounded by trees in the company of some of our very favorite people.  Whatever it was… it was a fun-filled, magical mid-August day that I’ll never forget!