So, today I’m having one of those days.  It’s Monday of course, so I guess that happens.  It’s like this…  I have what seems like a million things on my to-do list, but can’t quite seem to get any of them crossed off.  Does that ever happen to you?  Everything just ends up being a bit more complicated than it should be.  For example, I went to pick up our cleaning this morning (what should have been a five minute task) and their computer was down, so I literally had to sit there, while the girl rotated the dry-cleaning rack piece by piece until we found my clothes.  Fun stuff.

Anyway, it was a busy and lovely weekend filled with lots of walking, lots of eating (of course) and even a Broadway show – so let’s start by catching up with the 365 project and look at photos 161, 162 and 163: 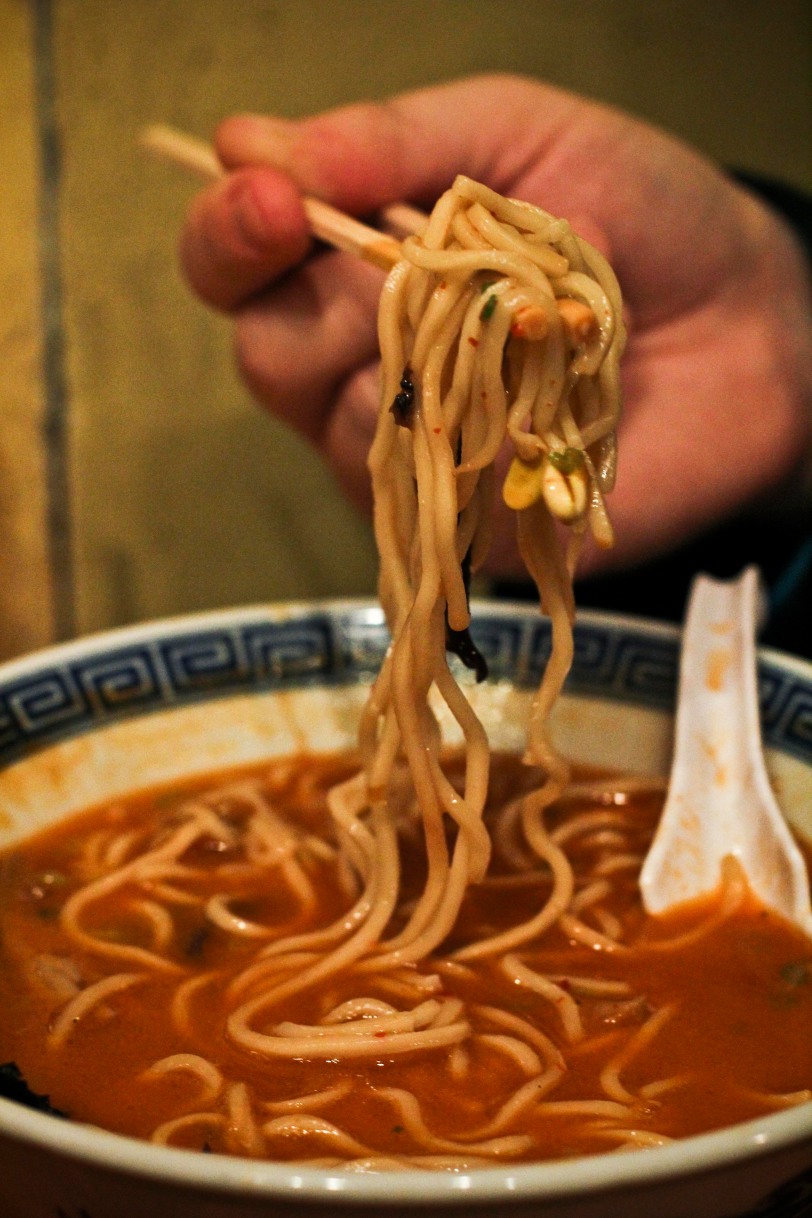 Adam and I are PSYCHED!  We discovered a heavenly little ramen spot just 3 blocks away from our apartment on Friday night and had the most delicious hot, spicy, noodly dinner.  The restaurant is called Minca Ramen Factory on 5th street between avenue A & B.  I got the pork & chicken mixed broth with pieces of sliced stewed pork and thin noodles.  Adam got spicy ramen with pork broth and thin noodles.  We are totally hooked now!  The slices of pork in the soup were melt-in-your mouth, fall apart tender and yummy – and the hot, comforting broth set us off just right for a quiet movie night at home.  It was a great start to the weekend. 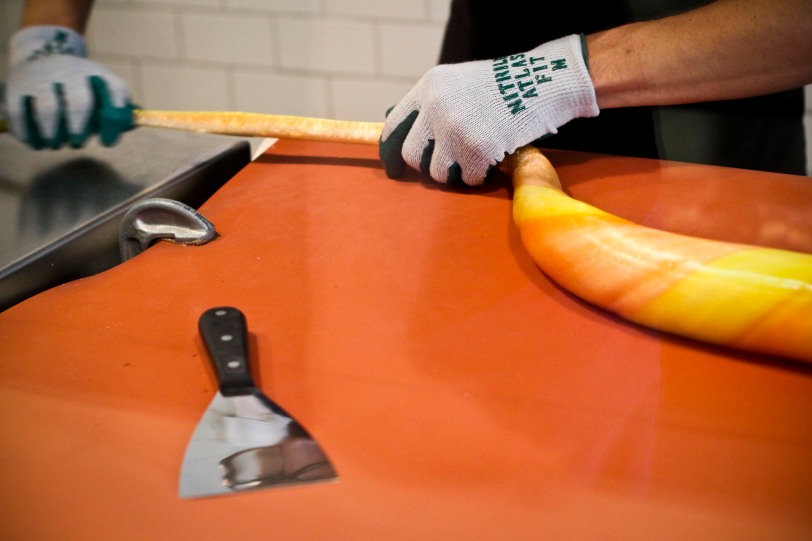 On Saturday, Adam and I had a nice leisurely morning and then walked all over the Lower East Side, Little Italy, Chinatown and Soho.  The weather was incredible!  I love days like that in New York.  It makes me fall in love with the city all over again. When I wander around NY like that, I feel like I am on a trip – exploring the unknown.  There are so many cool little shops and restaurants and parades of people – it is so stimulating!  And the neighborhoods are all so distinct from each other.  It’s magic.

The photo above was taken in a little shop called Papa Bubble.  It is an artisanal candy shop on Broome between Mott & Mulberry, that makes the most gorgeous little hard candies!  In the store, they have people making the candy right there so you can watch (behind a glass shield).  It was amazing!  The guy above was rolling this huge fat log of candy back and forth while stretching it into long skinny tubes with his hands.  Then there was another girl, chopping those tubes into candy straws, which later would be cut into tiny little bite-size sucking candies.  It’s a really cool thing to watch!  Here’s a video – but you should check this place out in person – and the candies make great gifts! 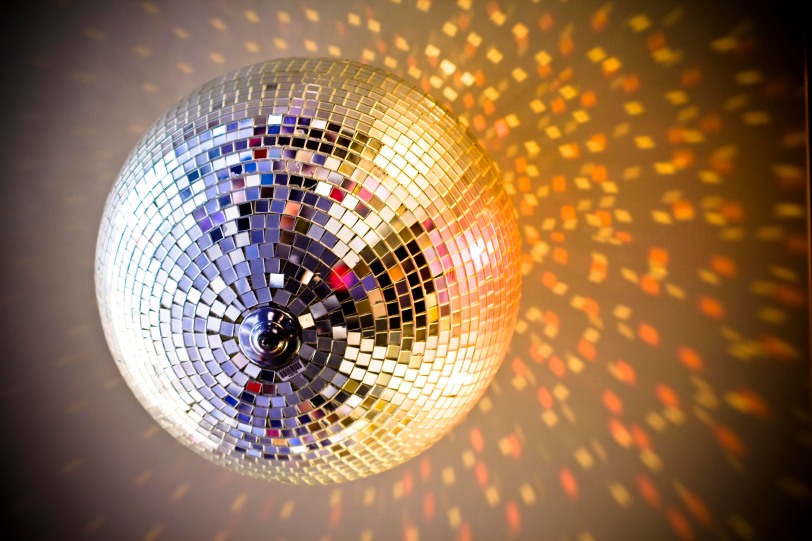 I took this photo yesterday on my way in to the matinee show of La Cage Aux Folles on Broadway. The theater was decked out with disco balls and hot pink feather boas and all things nightclub drag!  Kelsey Grammer played one of the lead roles and we ended up with fantastic seats – right up front – and at a 40% discount thanks to the TKTS booth!  Here I am with one of the fabulous eight-foot tall drag queens. 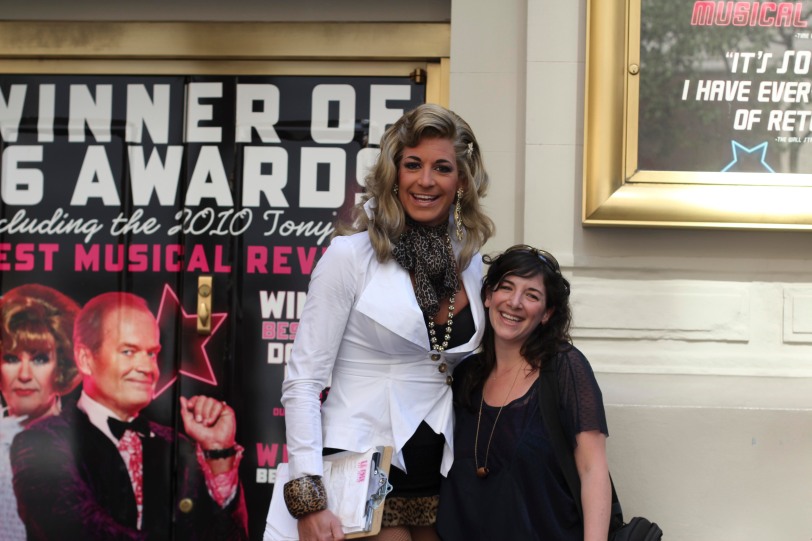 Is it wrong that I was kind of jealous of her toned-to-the-extreme bod?

Anyway, the month of October is quickly approaching and it’s going to be a month for the record books – Hello Lonesome is playing in seven film festivals including our first international premiere at the American Film Festival in Poland.  Unfortunately, we cannot go to all these festivals – but there is much work to be done getting everything ready.  Then there’s my photography debut at the Brooklyn cheese shop (details to follow), another awesome job for Food Network (details to follow) and our one-year anniversary, which will be celebrated while we’re at the Woodstock Film Festival next weekend! Sheesh!  Life is crazy. And awesome.  But I gotta admit… my head is starting to spin a bit. 🙂