These Lakers fans are pretty crazy!  Our first night here was opening night of the film festival, with the premier and after party of the movie The Kids Are All Right AND the Lakers were playing game 7 against the Celtics at the Staples Center (literally next door to the festival’s main hub).  Needless to say, downtown LA was BUMPING!  While mingling at the after party we started to see a commotion – people going over to the wall of parking garage (festival village is set up on the top floor of a parking structure) – looking down at the ground below.  Apparently, there were all kinds of riots!  The fans were rioting and LA WON the game!  I’d hate to have seen it if they lost.  I heard there were cars on fire and all that kind of drama.  The LAPD were on the scene with the riot police – I caught some pics from the roof. 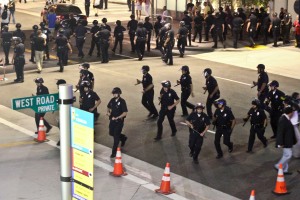 Yesterday – while on our way to see Toy Story 3 – the Lakers parade was going on in downtown and Adam and I accidentally found ourselves in the middle of it.  We were a little frightened.  Luckily – it was pretty tame and I think we were just on the fringe of the parade so all was well.  Until I got sick at Toy Story!  What a day.

We are on our way to Adam’s radio interview and then it’s the 2nd screening of Hello Lonesome.  The theater seats almost 300 people so hopefully it’s nice and crowded!  Til tomorrow!