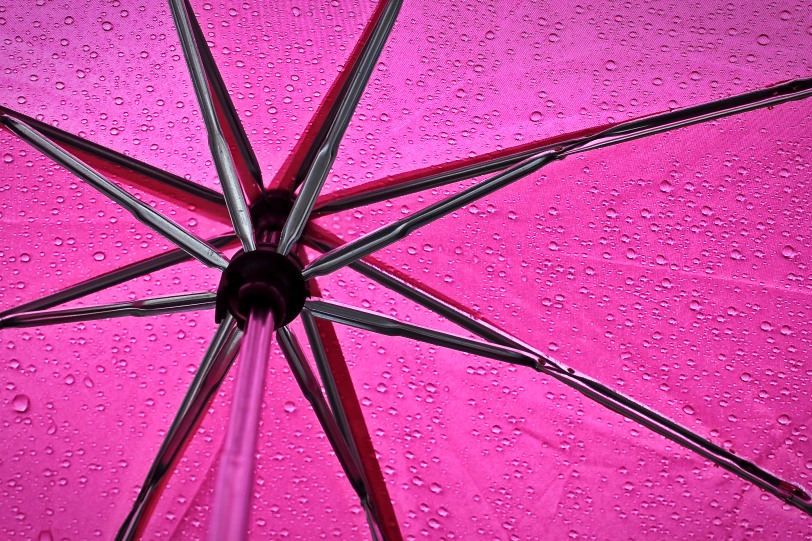 As many of you know, the weather in New York yesterday was delightful – with on and off torrential downpours throughout the day.  I left the house in the morning without an umbrella and had to buy a new one so as not to get completely drenched a couple hours later.  I bought this snazzy hot pink one – a departure from the cheapo black umbrellas I usually buy off the street.  With all the rain, I didn’t take my camera out of its case much, however I felt compelled when I looked up from underneath my new pretty pink umbrella and noticed all the little water droplets gathered on the top.  I wanted to capture and share that sight with everyone else so I snapped a few shots – aware once again, that passersby probably thought I was weird.  (I’m totally getting used to that – in fact, I sort of like it now).  The only thing I did to this photo in Lightroom was increase the contrast and clarity a little bit (to make the droplets more defined).  I also scaled down the vibrance a little… the pink was SO intense, that the droplets showed up more when I took the color down a notch.

Anyway, on Tuesdays I volunteer at the nursing home/rehabilitation center in my neighborhood.  I go in the morning to help out with art class.  Then I have a break for lunch between 12 and 2pm and then I go back for BINGO, which is the hot activity over there.   BINGO starts at 2:30 – watch out if you start any later… the residents watch the clock and will start complaining and getting all riled up if we start one minute after 2:30 (which happens almost every week)!  From two to two-thirty, we have to run around the six floors and pick up all the BINGO regulars.  Almost everyone is in a wheelchair, so it’s a bit slow-going… the elevators are in slow motion and it takes a while to get everyone situated.

Some of the residents are very superstitious and have specific rules we must follow when getting them set up for the game. Bertha, one of my favorite ladies… (she’s kind of crazy – but hilarious) has to have two red BINGO cards and only red chips. One of her cards must have the number two or four on it, the other must have a one or a three.  I usually select a few cards that satisfy her rules and allow her choose her favorites – that makes her the happiest.

The game is played in four rounds.  For the first three rounds, there are three winners per game.  For the last, there is only one grand prize winner.  Each winner receives a prize, which typically consists of a Hershey chocolate bar, a bag of chocolate chip cookies or chips or a little stuffed animal of some sort.  The Hershey bars are like gold!  Everybody always wants the chocolate – especially Bertha!  The last round has only one winner for a grand prize, which is usually a big stuffed animal or a big package of food (cookies or other sweets of some sort).  Junk food is always the favorite.  Yesterday two of the woman gave me money to go buy them Tootsie Rolls and Milky Way bars at Duane Reade during my lunch break.  I’m now their junk food dealer.  Typically, I’d try to talk them out of eating such crappy processed food… but they’re old, and they’re stuck in a nursing home and that’s all they really want – so I oblige.

I’ve been volunteering at Cabrini now for almost nine months and I still really enjoy it.   I don’t know if I could do something like that full time, but there are moments that fill me up so much, that I actually stop and consider it every once in a while. Yesterday during art class, I worked with a woman who is known to be quite difficult and nasty.  To me, she was nothing but pleasant and sweet.  The art teacher said it was amazing how she took such a liking to me.  It totally made my day.

One of my other favorite women, Anthy (she’s from Greece), lost her sister Kiki several months ago.  Kiki was Anthy’s older sister and they lived together in midtown for most of their adult lives until they both moved into to the nursing home.  Anthy never got married and Kiki was only married for a year or so before splitting from her husband (I never got the full story).  Kiki was a milliner and used to make all kinds of fancy hats.  Even in the nursing home, I felt like she had a total sense of style – she always looked put together and classy.  I got to know Kiki a little bit before she passed away and I was so touched at how sweet the sisters were to each other – always looking out for one another.  Anthy has been very blue since Kiki died so I usually stay and visit with her one on one for a while after BINGO is over.  I take her out to the patio to get some fresh air and we chat.  A few weeks ago she was especially worked up about Kiki being gone and she said to me… “God sent you to watch over me”.   I wanted to cry – it just shows how my little visits each week really make an impact.

Here is a photo I took several weeks ago during BINGO.  Jamo won a bag of chocolate chip cookies in round one and then got mixed up and was using his cookies as BINGO markers and putting the BINGO chips in his mouth.   After I stopped him from eating the BINGO chip, I had to take a picture. 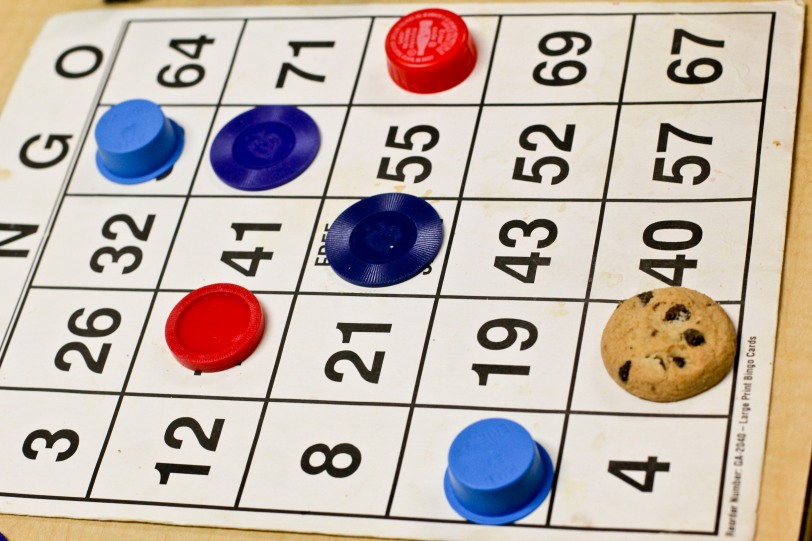