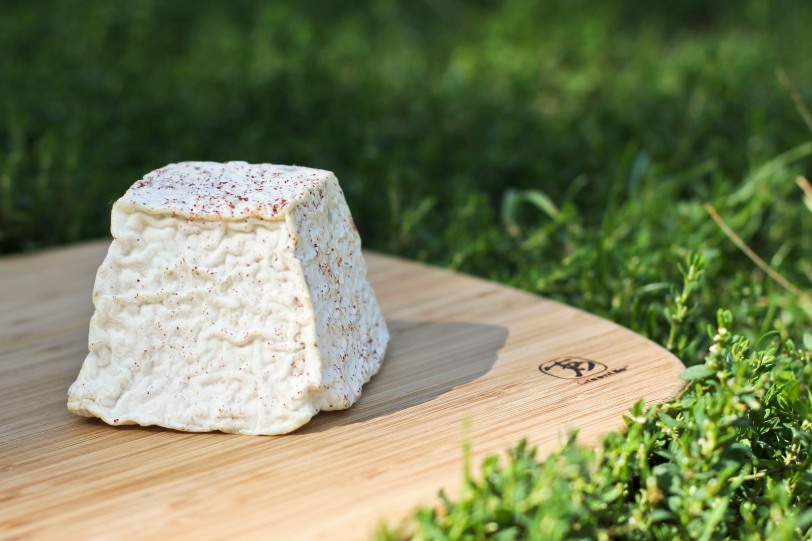 It’s Thursday!  That means it’s time for cheese.  Yesterday after we wrapped shooting over at Chelsea Market, I stopped by Lucy’s Whey to pick up my weekly cheese selection!  I’d been reading all about this new cheese shop, featuring an all-American roster of delicious cheeses, but I hadn’t made my way over to the west side to check it out yet.  What a cute little shop – with lots of enticing options! Last week we talked about a French, washed-rind cow’s milk cheese (Prefere de nos Montagnes), so this week I opted for an American, bloomy-rind goat’s milk cheese to keep things interesting.

Piper’s Pyramide comes to us from Capriole Farms, which is in Indiana near the Kentucky border (yay Indiana… my alma mater).   At first glance, this cheese was intriguing to me for a couple reasons.  First – there are little reddish speckles on top … a sprinkling of paprika.  From Capriole’s website, I learned that this little beauty of a cheese is named after the cheese-maker’s granddaughter, Piper, who is said to have red hair – hence the paprika!

I also noticed the way the rind is all brainy-looking.  During my days as an affineur-in-training (affineur is the person who ages and cares for the cheeses) at Murray’s, I learned that these brainy-looking cheeses are made using a mold called geotrichum candidum, which adds to the flavor of the cheese and contributes to this wrinkly rind.  I could tell just by looking at it from the outside, what it might taste like – as I have tasted several of these cheeses and they tend to share flavor characteristics that I usually enjoy!  So I figured this one was a good bet.

The first thing I did before I even cut into this cheese was to give it a good sniff!  The thought that comes to my mind when smelling this little pyramid is a musty damp cellar.  Sound enticing?  Well, it actually makes sense because cheeses are often aged in damp, cool, underground caves.

After cutting it open…  it looks totally uniform on the inside.  The paste looks very white and chalky and seems on the dry side.  There is also a thin straw-colored line right along the border of the rind – the consistency is a little creamier versus chalkier along the rind, which is because the cheese ripens from the outside in.  As the cheese ages more, it will get creamier and creamier until only the very middle is chalky – or until it’s creamy all the way through.  Because this one was so dense and chalky – I have a feeling it wasn’t aged quite enough and could have used another week or so in a cave before being sold.  Before I tasted, I gave the inside a little sniff as well.  To me the inside smells much brighter than the outside did… sort of like fresh mowed grass versus damp basement.

Finally – I cut off a piece of cheese and gave it a taste.  At Murray’s they taught me to taste the cheese first without any rind – just the inside paste.  After, taste the paste along with the rind to see how the rind changes the flavor.  I often find that the rind adds a lot of flavor and interest to the cheese… I’m a total rind eater.  This cheese (without the rind) tastes really mild.  There is a little bright tang (common in goat cheese).  I also found a mild sweetness – like the inside of a cheese blintz, but with a little goaty kick.  The rind adds that musty damp flavor, which when eaten in small doses, compliments the cheese quite nicely.

All in all – I enjoy this cheese, but again… it doesn’t rock my world.  It is a nice summery cheese – light in taste, a bit dry and crumbly and not too heavy.  It would be good with a glass of white wine or a rose on a warm summer night – maybe with a salad?  Or just some french bread and tart fruit?  I, personally tend to like my cheeses with a little more oomph, and a little more complexity and intrigue!  This cheese is just nice, yummy and simple.  I also would like to try it again aged a little more.  The Lucy’s Whey website, describes it as “gooey and naughty” – and I definitely didn’t get that.  Gooey and naughty sounds just my speed.  So yes, I’ll have to give this one another shot.

Oh, so to finish up, that is a good lesson for the day… try cheeses more than once!  They can be quite different each time you try them – based on the season they were made, the care with which they were aged and about a hundred other reasons – that just keeps it even more interesting in my opinion!  See you next Thursday for possibly a sheep’s milk cheese?  mmmmmmm.