For this week’s cheese, I wanted to get something yummy made with sheep’s milk.  I took a walk down to Essex Market, where the lovely Anne Saxelby of Saxelby Cheese assisted me.  Anne used to be a cheese monger at Murray’s, but left a few years ago to open her own little cheese shop, which features a delicious array of all American-made cheeses.  Since I know that Anne is the owner of the shop and is super passionate about cheese, I trusted her 100% to steer me in the right direction in choosing my selection.  When you’re cheese-obsessed like I am, and you want to taste every single cheese that exists, it sometimes helps to leave the decision up to someone more knowledgable than you.  That’s a good tip for approaching a visit to a cheese shop… once you find a monger you trust, let them wow you!  They spend all day tasting all kinds of cheeses and make it their life’s work to share the most delicious ones with you!  So just give up control and be game to try new things!

Anyway, I went up to the counter and asked Anne… “is there anything really special and awesome that you are loving right now?”  She said, “I know just the thing” and handed me a taste of Ben Nevis.  Mmmmmm.  Right away it brought a smile to my face.  It was just simply yummy.  It’s pretty mild – not really complex or pungent or challenging.  To me – this is an easy cheese to like – not really an acquired taste.

Ben Nevis is made by the folks at Bonnie View Farm – a sheep dairy in Northeast Vermont.  The farm is owned by the Urie family, who came to Vermont from Scotland in the late 1800’s.  The current owner and cheesemaker is Neil Urie – a fourth generation dairy farmer.  On the farm, they have 170 sheep, which are milked from April/May to October, while the sheep are able to feed outside on pasture (grass).  The cheese is made with raw milk (not pasteurized) – because of this, the animal’s diet of lovely fresh spring/summer grass strongly contributes to the flavor of the cheese.  Once made, the cheeses are aged throughout the summer for four to five months… that is why the first batches are just hitting the stores now (5 months since April)!

The name “Ben Nevis“, is actually the name of the highest mountain in Scotland.  So I guess Neil Urie was giving a nod to his Scottish roots in naming this baby.  The cheese is made in a unique square-shape and from the outside, the rind has a somewhat stone-like appearance with soft tones of brown, tan, white and a slight ruddy color.  On the inside, the paste is a pale yellow in the middle, turning a darker more mustard color towards the rind.

When I give the cheese a sniff, I smell a little bit of that cave/damp basement smell closer to the rind.  The middle smells bright and a little sharp – but milky.  Now to taste…  the consistency of this cheese is sort of firm and a little crumbly but not as hard as say a parmesan.  When I press it with my finger, it gives a little.  The first things that strike me as I taste the cheese are salt and tang.  There is definitely a good kind of sour/tanginess to the flavor – it makes my mouth salivate underneath my tongue!  There is also a very mild sheepy flavor – but not too much.  Sometimes you can really taste the barnyard flavor – you close your eyes and can picture yourself in the stables with the animals.  This cheese is NOT like that – but if I tasted it without knowing what kind of milk it was… I would guess sheep.  It just has that sheepy essence to me!

I asked Anne what kinds of condiments might pair well with the Ben Nevis.  She recommended a mild honey or interestingly a maple syrup – to offset the saltiness!  I don’t have any maple syrup at home right now, so I tasted it with something called Pear Mostarda (pear mustard), which is basically candied pears with mustard essence added.  I tried pear mostarda for the first time at one of my Murray’s classes and hated it!!  I thought it tasted like nail polish remover.  Now, however, I think it’s delicious… a testament to why you should always taste things more than once!    Anyway, in the class, it was paired with a sheep’s milk pecorino cheese, which is why I thought it would go nicely with the Ben Nevis.  I think it totally works together – though I gave a taste to my friend Amie and she thought the mostarda overpowered the cheese.  I guess you’ll have to try it for yourself! 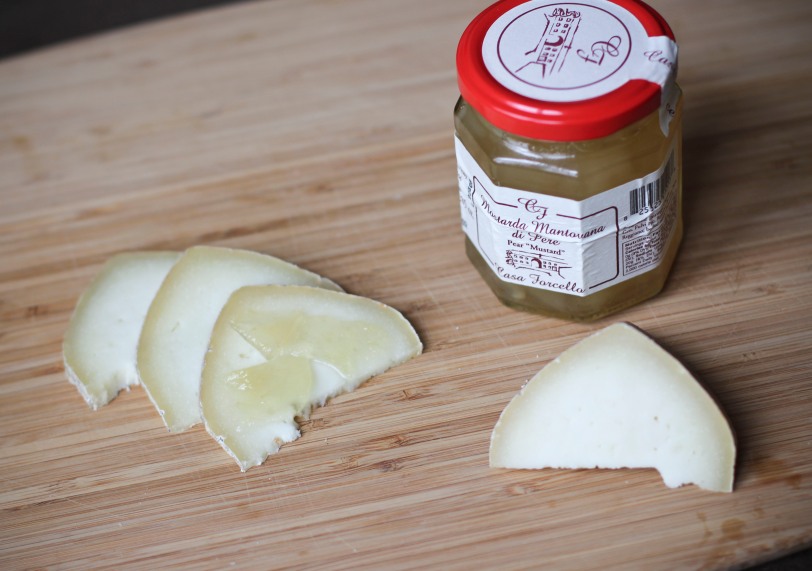 So, there you have it – Ben Nevis.  I enjoy this cheese quite a bit – but for its simple cheesiness.  Often, I tend to gravitate towards the more interesting, pungent and complex flavors – this is not that. But this is good… and tasty.  And if you want to try it – it’ll probably only be available from now through maybe February – then the last of the cheeses aged four to five months from spring/summer milk will be gone and we’ll have to wait until next year for the next batch!  That’s all for this week’s cheese du’jour…  see you next Thursday!  Oh – and if you’ve tried any amazing cheeses lately – please write me a comment and let me know.  I’m always scoping out new cheeses to try!