A Halloween-Centric Weekend – With Some Thoughts on Food of Course…

Hello everyone!  So – last I left you, it was Thursday afternoon and I was grumpily heading to the annual Northern Lights halloween party.  I didn’t feel well and was very crabby, but, true to form, after my second drink, I was happy as a clam, all dressed up like a sexy saloon girl and enjoying the party.  Adam was a zombie cowboy and I had some nasty bloody wounds glued to my neck.  My story was… that Adam came into the saloon and bit me – he was already zombified… so I was slowly becoming infected as well.  Nice huh?  Anyway – the party was great and the costumes were creative and awesome!  Here is my dear friend – the foxy Amie – who made my photo of the day with her saucy 70’s afro disco queen costume.  HOT HOT HOT!! 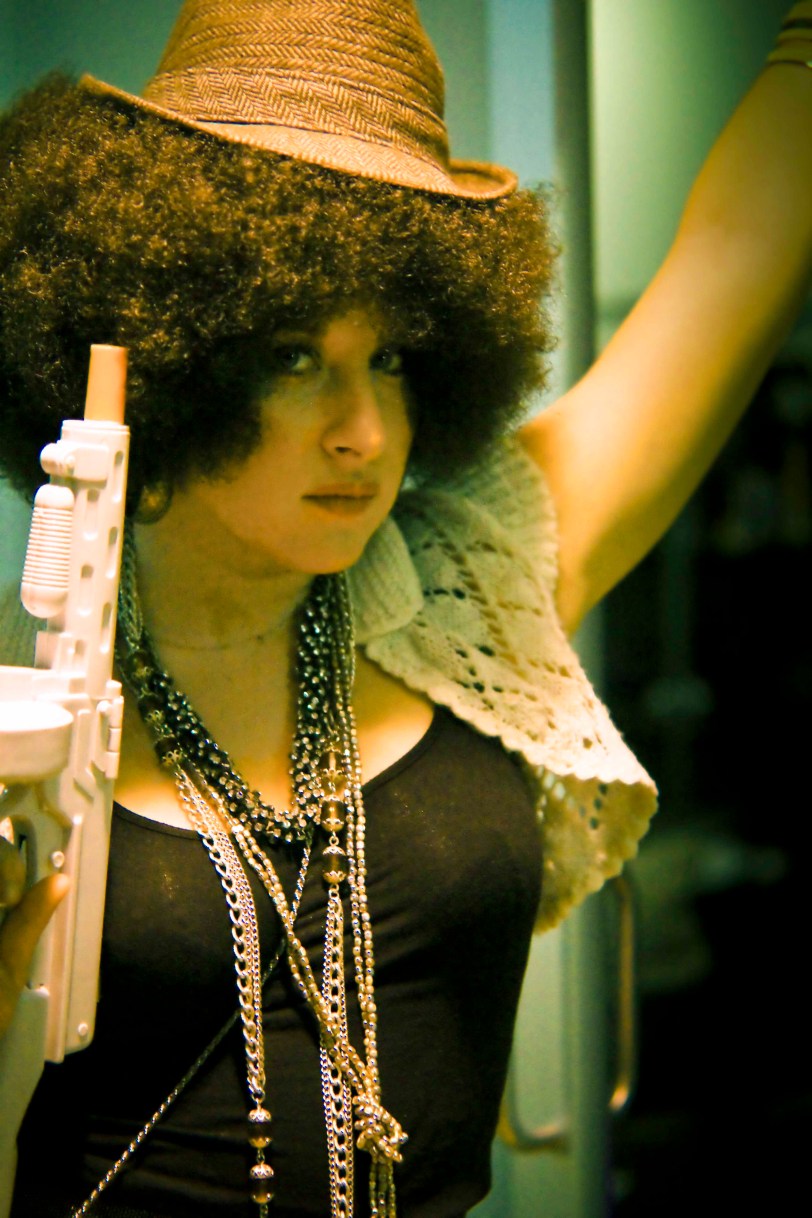 Here are some other photos from the evening… 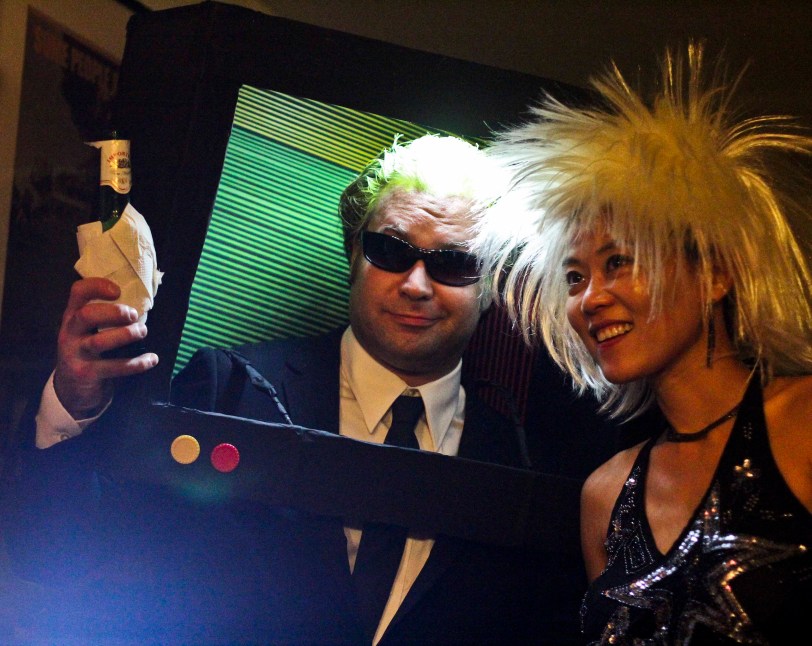 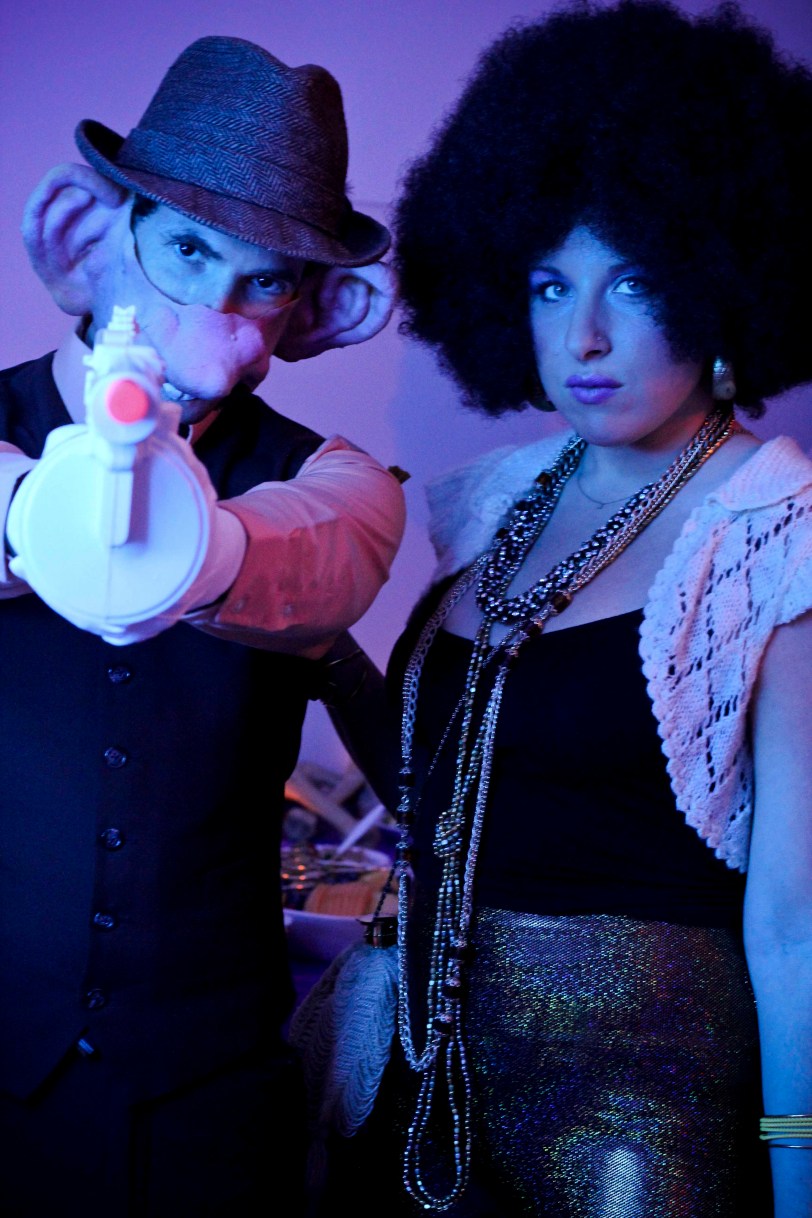 And a closeup of Rob in his freaky mask: 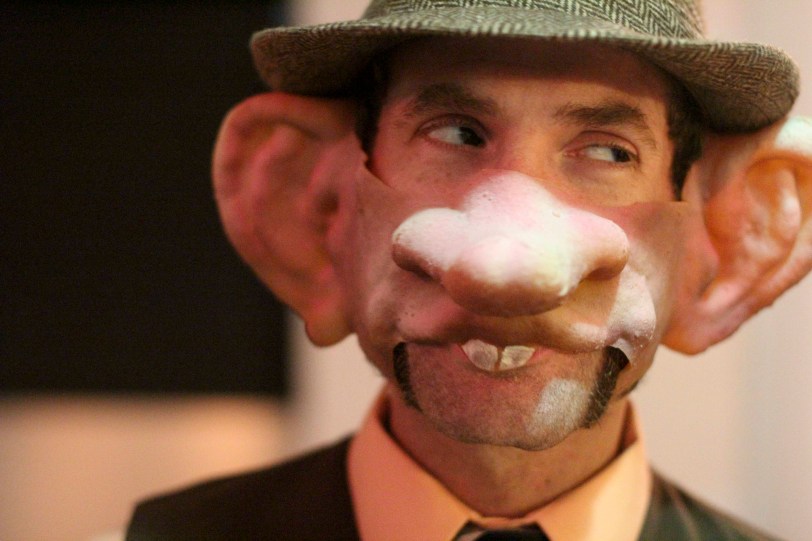 Dave & Lucy get an “A” for creativity and craftiness with their homemade bed bug costumes! 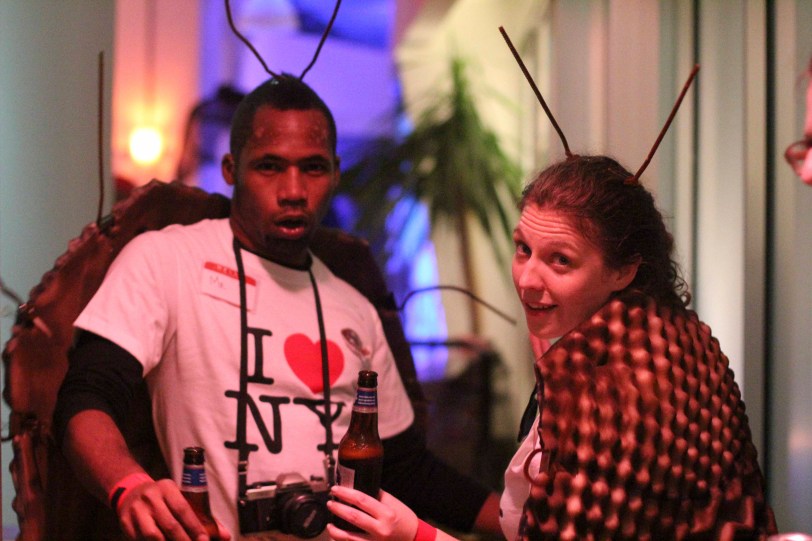 And here I am in my saloon girl gear with my bloody wound… sexy sexy.  I also had blood dripping out of my mouth but you can’t really see it with the red lighting! 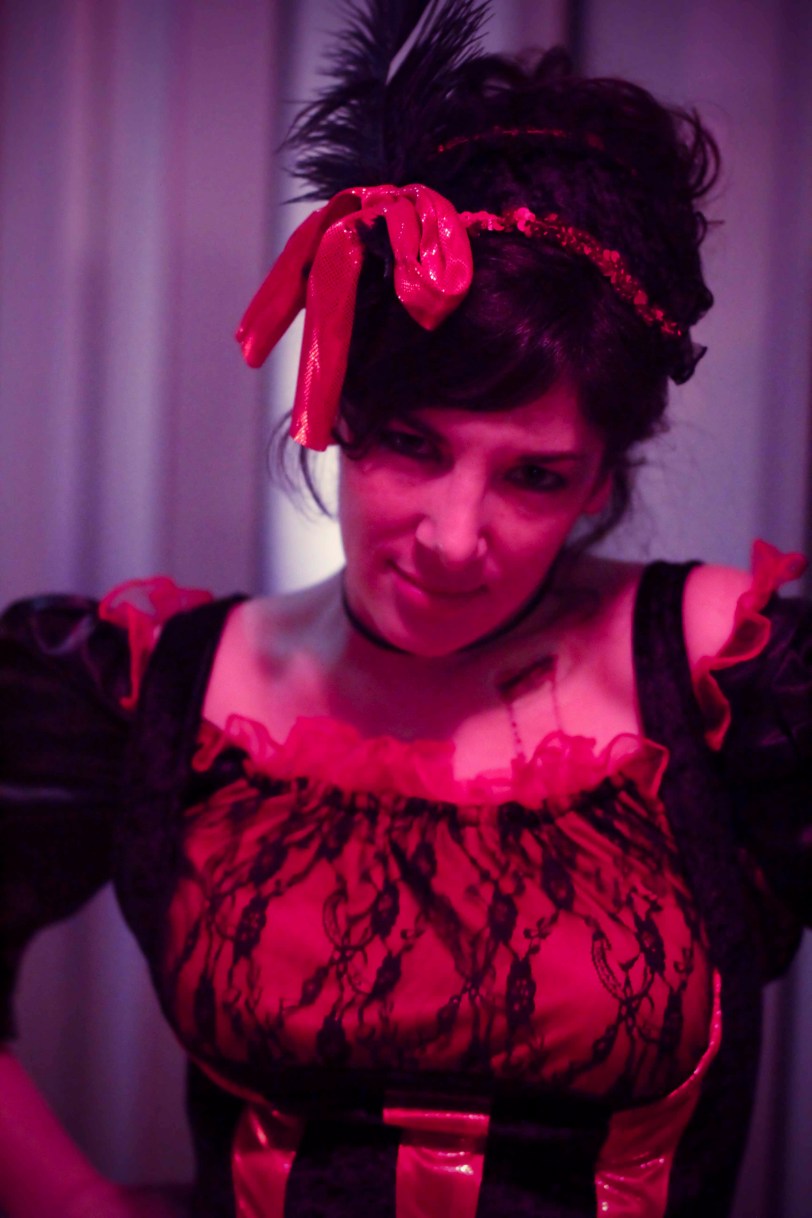 And here is my zombified other half.  Freaking terrifying right?? 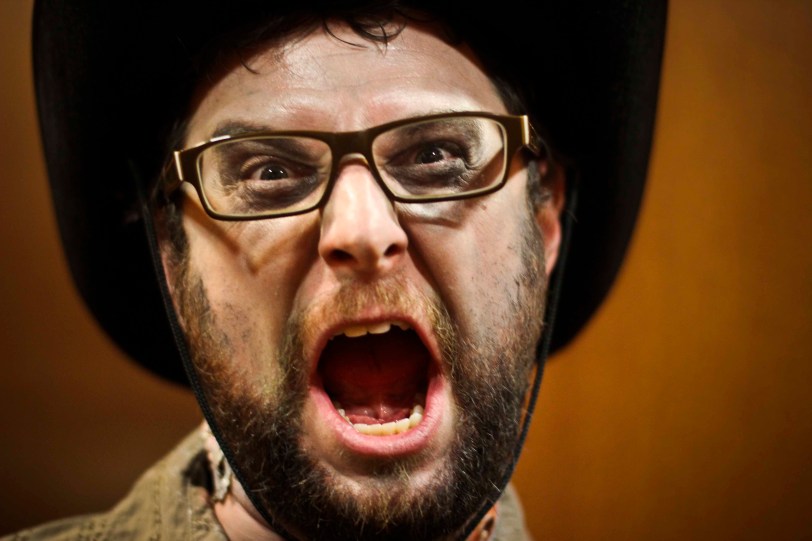 And finally… the awesome Bodega pumpkin.  Isn’t it beautiful?! 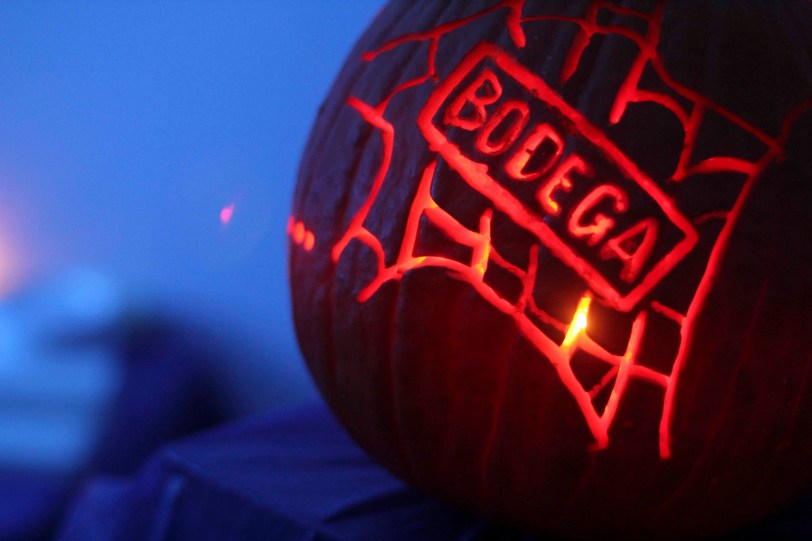 So… the next day (Friday), we had to wake up early to be at a Food Network/Barneys shoot at 8:45 in the morning.  I was working once again as a camera assistant/B camera operator – Adam was the director and our dear friend Mark was once again the DP (director of photography)… I’m learning the production lingo.  It was very exciting – though I must admit, we were a little hungover from the party and could have used more sleep!  However, once we stepped through the doors of the Barneys Display Studio I forgot my hangover and got really excited.

We were hired to do another interview with Simon Doonan – Creative Director of Barneys, about the fabulous Food Network-insired holiday windows that are going to debut November 16th at Barneys!  Of course, holiday window displays in NYC are super competitive and over the top and this was an incredible behind-the-scenes look at the process!  It was just a big art studio with crazy awesome installations and artists working away on a myriad of projects.  Here is a press release sharing details of the project.  We are doing a few more shoots leading up to the unveiling of the windows on 11/16 and the after party that night, which I’ll be shooting!  Pretty freaking rad.  Oh – and here is photo 203, which I took in the taxi ride coming home from the shoot: 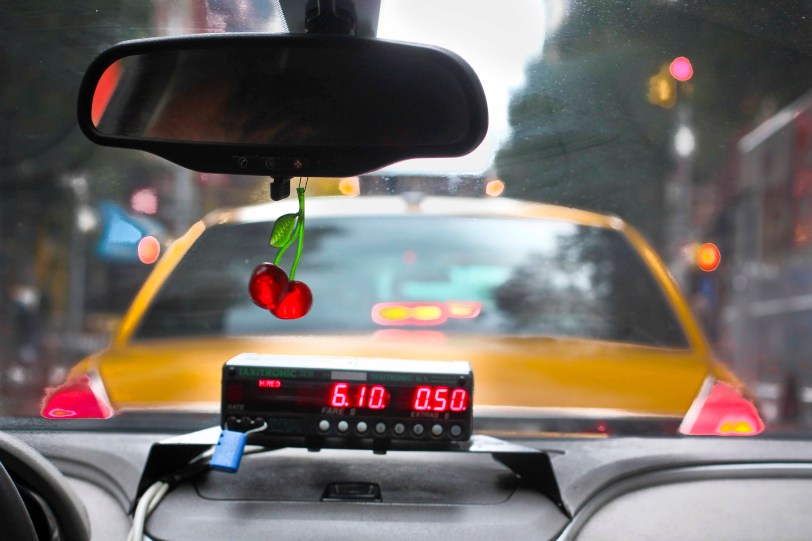 Friday night Adam and I literally went to bed at ten o’clock like little old people and remained in bed until about one o’clock on Saturday afternoon.  A much-needed sleep marathon.

On Saturday night we had another Halloween outing.  We went out with Amie & Rob to Death & Co. for dinner – in costume of course.   It was great – we got in right away at nine o’clock with no wait at all.  We had a variety of yummy small plates including:

I don’t know if I’ve mentioned this before… but it is my favorite thing in the world to share tastes of a bunch of different dishes at a meal! I get so excited – trying such a variety of flavors, textures and spices!  Seriously – my dream is to be like Padma or Gail Simmons on Top Chef – where I just taste a million different dishes from super talented chefs and share my thoughts on each one.  Wouldn’t that be the best job ever?    Anyway, I digress.  Dinner was awesome and we washed it down with some delicious and creative cocktails, which Death & Co (speakeasy vibe) is famous for.  My drink was called the Rita Hayworth – it was made with pineapple and sage-infused Siembra Azul Blanco Tequila, fresh-squeezed lime juice and house-made Acacia-honey syrup. 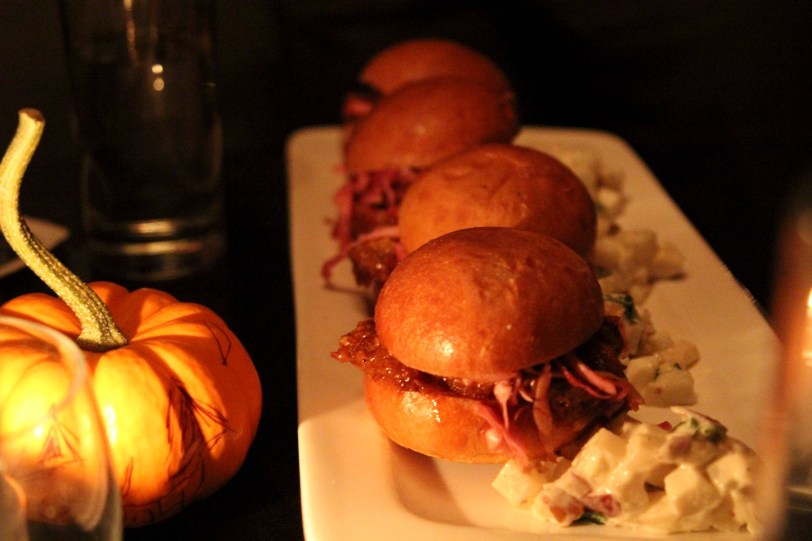 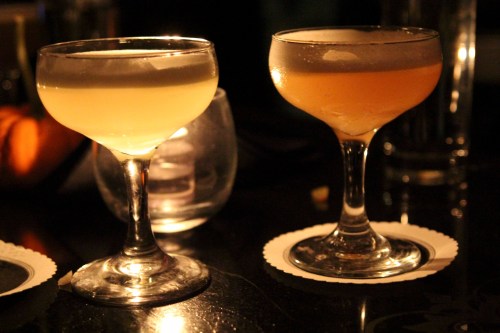 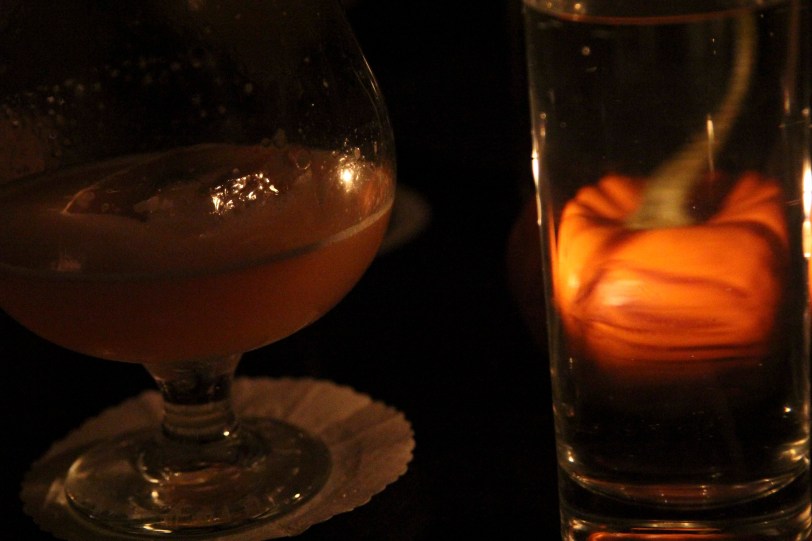 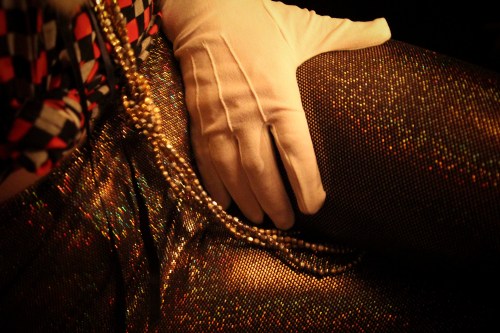 After dinner we did some neighborhood bar-hopping.  Rob was dressed up as a coked-up serial killer and we had fun taking pictures of him stabbing people all over the East Village: (Adam gets credit for most of these photos): 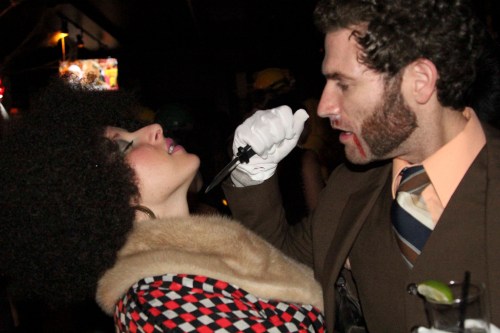 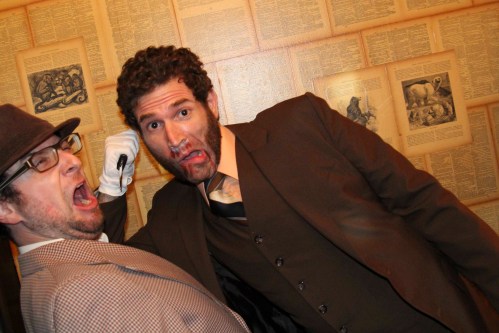 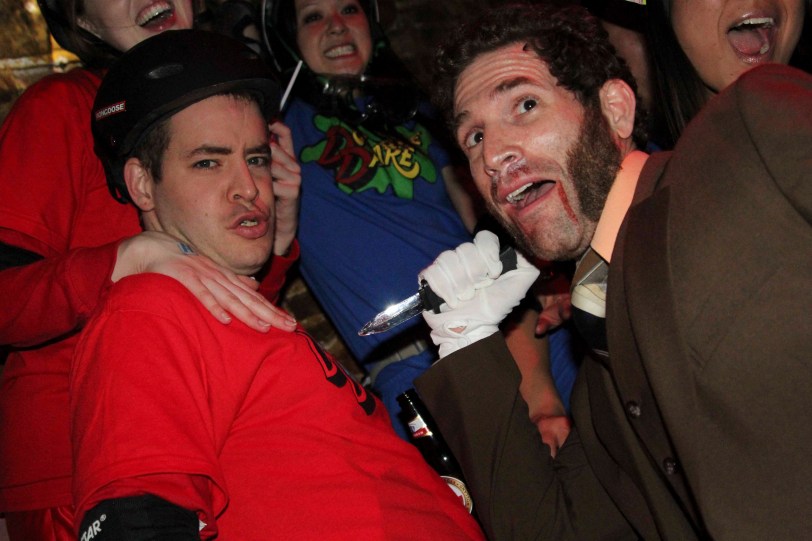 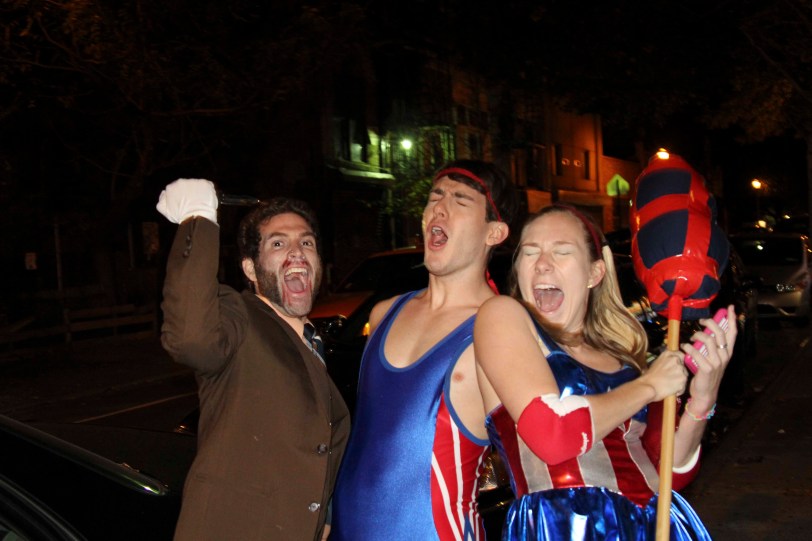 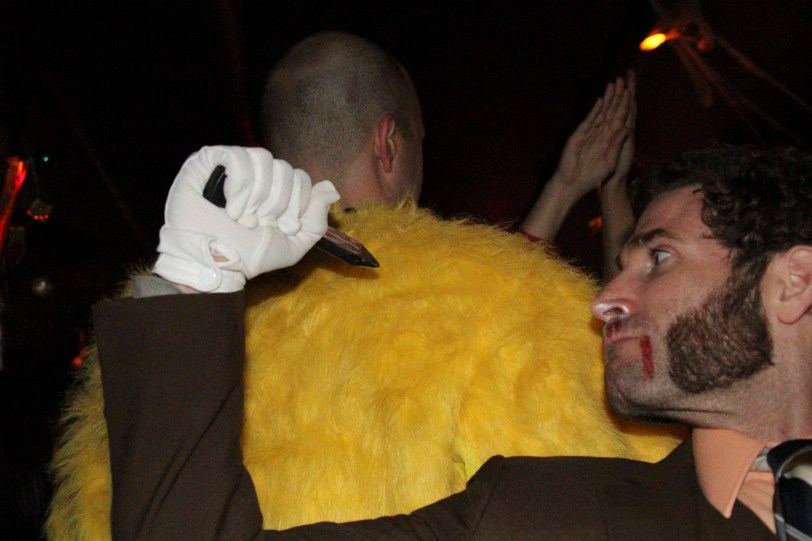 And... Backwards Stabbing a Big Chicken 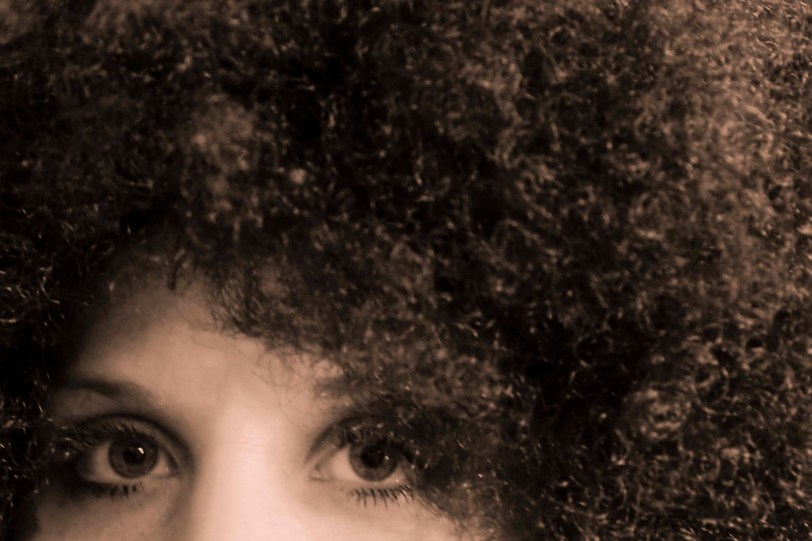 Fun times.
On Sunday we had brunch with Pam and Rob at Alias in the Lower East Side and then walked around Tompkins Square Park.  That is where I took photo 205: 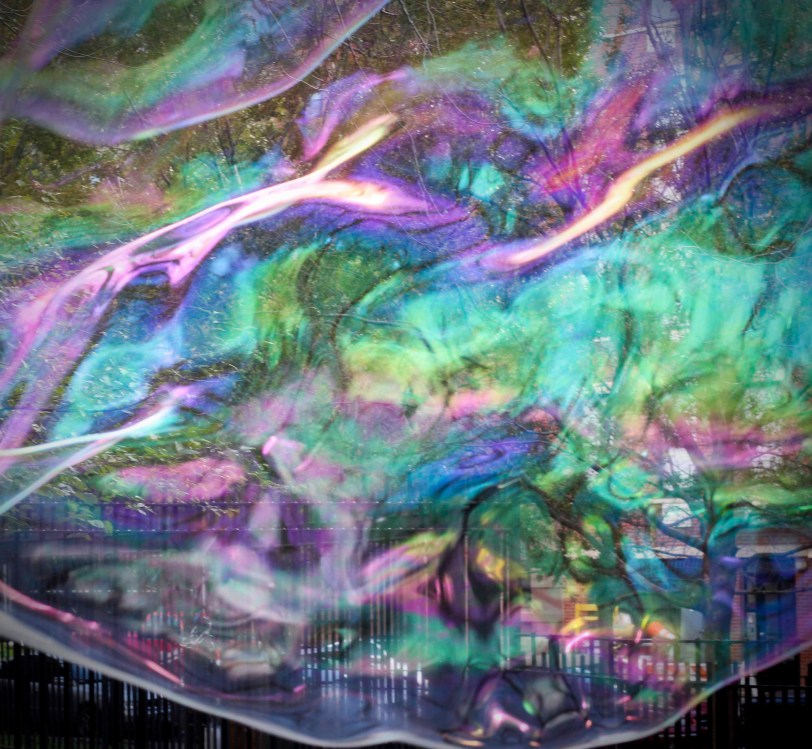 Now I’m running late and I have to run out the door!!  I’m not even proof-reading this ridiculously long post!  I hope you enjoy and I’ll see several of you tomorrow at the Big Apple Film Festival screening of Hello Lonesome!!  Woo hoo!