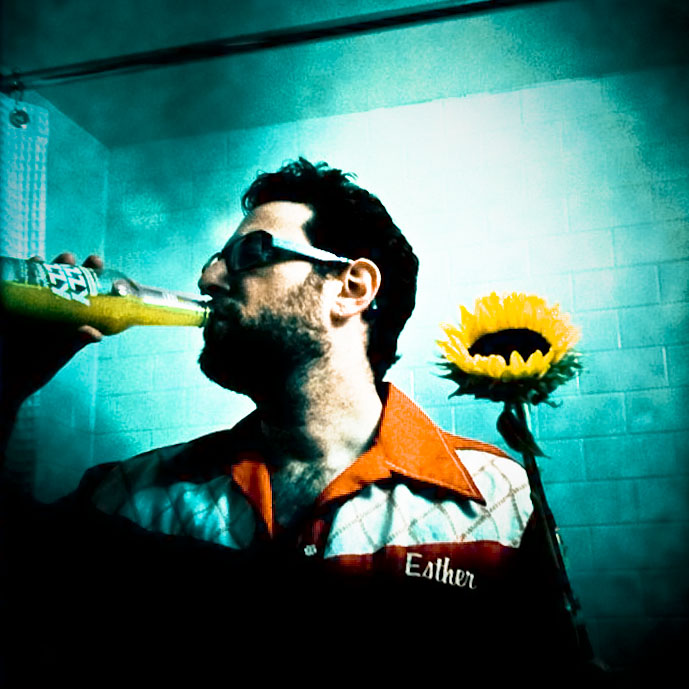 This picture was taken with Adam’s iPhone and the Hipstamatic app.  It creates retro-looking digital photos from your cell phone camera.  I only took ten or so photos yesterday (thank you Adam for being my model) and I didn’t look at them on the computer before I went to bed.  When I loaded them this morning, I wasn’t really crazy about any of them… which sucks because I always want to personally enjoy the photo I post each day.  So, I chose my favorites and played with them a little in Lightroom. Now I’m totally digging this picture!  Just popping the colors and increasing the contrast made it so much more appealing to me.  Love the editing process!

Anyway, yesterday was one of those days when we barely left the house.  We started our morning with breakfast at Cafe Pedlar on Clinton street. We’ve been buying coffee beans from them lately (Stumptown coffee… really yummy) so we decided to try out their breakfast.  I got a gruyere and caramelized onion omelette and Adam got a bacon, egg & cheese (gruyere too I believe) sandwich on a biscuit.  I thought both were pretty good.  My omelette was actually really fluffy and I liked the caramelized onions, which I’d never had in an omelette before.  The bacon, egg & cheese was good too, though I probably would have liked it better with cheddar instead of gruyere because cheddar would give it a little bite.  I thought it needed something.  The biscuit was super fresh and delicious!

Besides the food, I wasn’t crazy about the overall breakfast experience there.  It’s a tiny place and we were seated very close to the tables on either side of us, which is always a little awkward.  We waited more than 30 minutes for our food – with little attention in between from our server. He was very nice… just not very present. Adam is much more patient than I am when it comes to service at restaurants… but 30+ minutes for breakfast??  That’s a little excessive – right??

After breakfast (really more like a 1:00pm brunch) we were in for the rest of the day.  We’ve had a lot of excitement lately and I think we’re  both sort of still coming down from it all.  We cranked up the AC and totally hibernated… watched some soccer, did some work, watched The Truman Show for the second time (halfway through we remembered why we didn’t like it much the first time) and had some much-needed chill time.

Today was more of the same… though we’ve been pretty much working at our computers for most of the afternoon & evening. We just finished dinner, which I totally improvised tonight.  I bought some chicken breasts at the farmer’s market and a wonderfully delicious cucumber, which I cut up and served with a little rice vinegar and a touch of sesame oil, salt & pepper. Next time I wouldn’t add the sesame oil, though Adam liked it.  I also broiled some leftover red, yellow & orange bell peppers in the oven (cut them up, salt, pepper & olive oiled them and cooked them on skewers).  For the chicken, I cut it into smaller pieces (each about the size of my fist) seasoned it with salt & pepper, lightly coated it in flour and cooked it in the cast iron pan in a tiny bit of olive oil and garlic butter.  Then I made a bbq sauce with ketchup, brown sugar, molasses and cider vinegar.  When the chicken was nearly done in the pan,  I brushed on the sauce and broiled it for about 2-3 minutes on each side.   ‘Twas absolutely delish!  A recipe-free success!

Now I’m going to go catch the end of Harry Potter & The Order of the Phoenix.  Til tomorrow!