And here we are… it’s Monday again.  Really – the weeks are just flying by lately.  Before you know it, it’ll be Thanksgiving and then Christmas and New Year’s, and then I’ll turn thirty-two.  Crazy.

Meanwhile, I’ve had a very Brooklyn-centric few days, which is good – because I’m doing some research for which neighborhoods we might be interested in moving to next summer.  Last Thursday, I stopped by Brooklyn Victory Garden to drop off the last of my photo show materials and I decided to take a nice long walk through Clinton Hill, Fort Greene and then into downtown Brooklyn before heading home.  I was amazed at all the beautiful residential buildings in Clinton Hill.  It’s fun wandering around and discovering the beauty and character of each of the different Brooklyn neighborhoods.  Photo 195 was taken in Clinton Hill… I wish I looked to see what building this is – unfortunately, I didn’t!  But it was gorgeous!  I also sort of messed up with my camera settings.  I probably had the ISO all the way up to 6400 from shooting previously in a darker setting and I forgot to change it – if I were to take this photo again, I’d use a much lower ISO. Using the high ISO setting creates that grainy quality that you can see here.  I actually think it works with this photo (looks like a newspaper print or something) – but it was an accident! 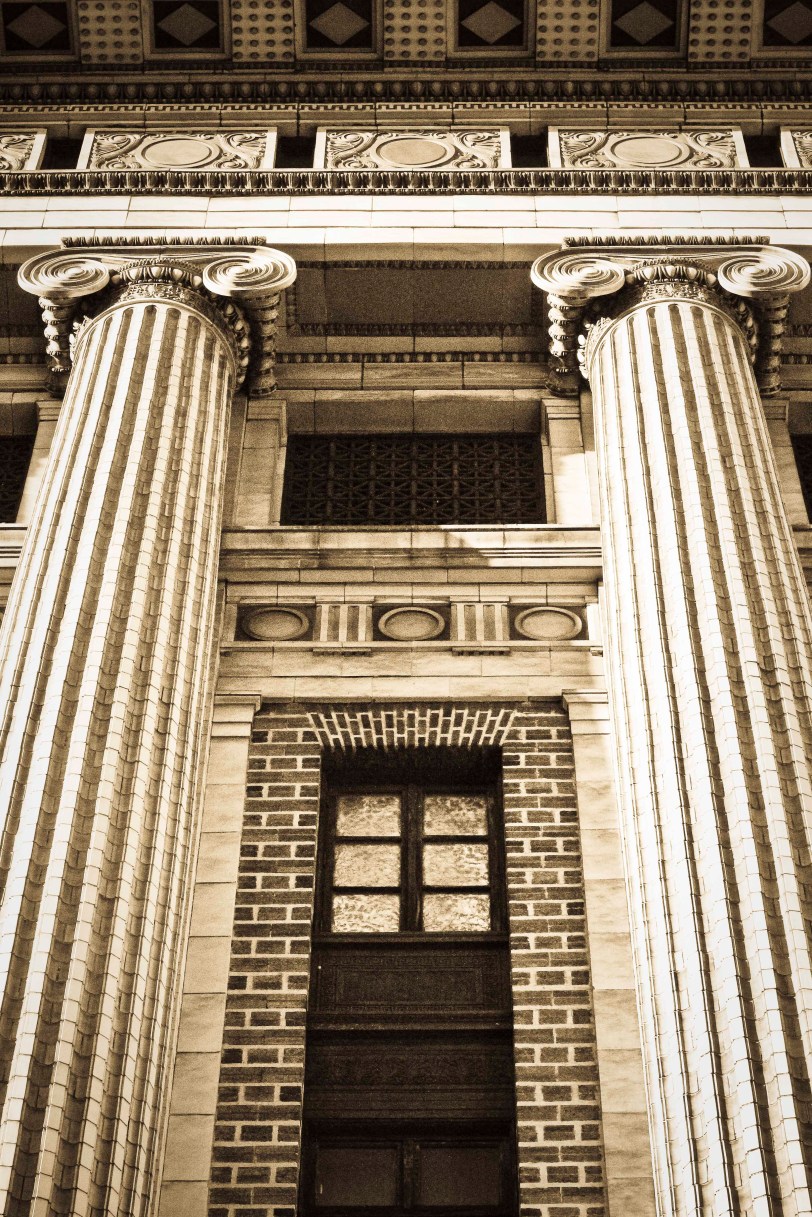 On Friday I spent another three hours at the dentist.  I’m in the process of having some major dental work done and have seriously logged probably fifty or more hours at the dentist since before our wedding last October.  It’s pretty intense.  But I’m almost done and the finished product should be fabulous and well worth all the trouble.  My dentist visit inspired photo 196 – a nice close-up self-portrait of me looking not so happy.  Ouch. 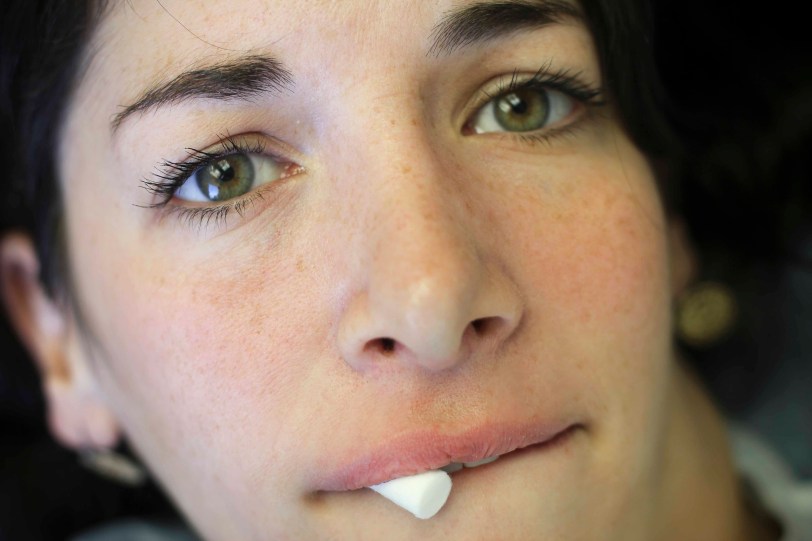 On the way home from the dentist, I stopped at Barnes & Noble to look for a good recipe for dinner.  I had an entire head of broccoli and I wanted to do something with it so I found a recipe for Broccoli Cheddar soup in the Cooks Country Cookbook.  I wrote the recipe down on the back of my magazine and headed down to the subway.  On the F train, I was sitting there, listening to my ipod – wondering if I indeed looked as funny as I felt like I looked (major novocaine action – mouth totally numb).  Then this guy got on the subway – he was super preppy and was wearing these corduroy pants with little dogs on them. 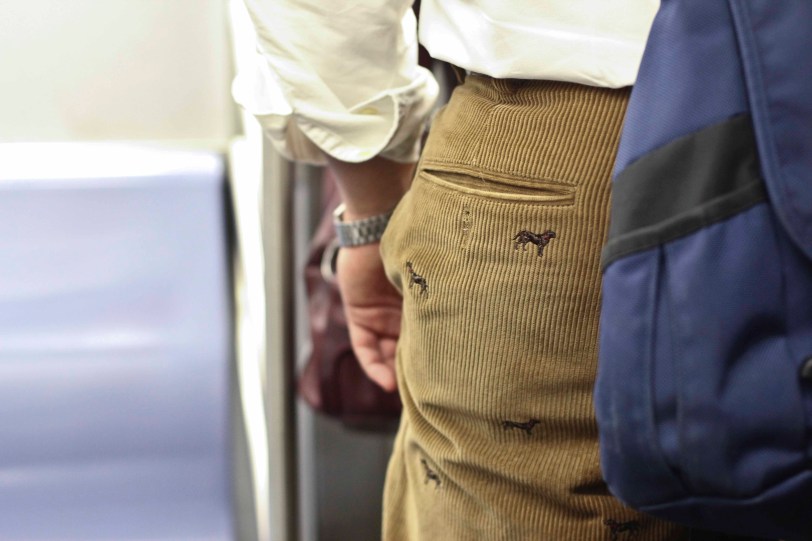 I thought the pants were pretty amusing… I always think that style is funny – is it Nantucket style?  With little flamingos or lobsters, or in this case… dogs?  I don’t know – I looked up and there was this kind of thuggy guy sitting across from me on the train and he was staring at the guy’s pants too.  Then we looked at each other and both giggled… but my mouth was so messed up from the novocaine, that I felt like my smile was all crooked and stupid-looking.  I was embarrassed.  I wanted to explain that I had novocaine mouth – but honestly… who really cares?  He got off at the next stop.  But it was a funny moment.

On the way home I had to get butter and cream for the broccoli cheddar soup so I stopped by Saxelby’s at the Essex Market.  They had organic fresh local butter on the menu – YUM – so I asked for some of that.  Turned out – they had to cut it fresh from a ten-pound block.  Great photo op!  I had never seen butter in a ten-pound block before – drool.  Here is my favorite shot from the butter-cutting session:

The soup came out quite delicious!  And I was happy because we ate an entire head of broccoli between the two of us over the course of Friday and Saturday.  I served the soup with some toasted fresh baguette for dipping and had some bites of dark chocolate for dessert.

On Saturday, we took a trip to Clinton Hill again to check out Brooklyn Victory Garden on opening day!  It was super exciting – my photos look fantastic and I’m really proud of myself for actually getting it all done!  And the store is so adorable.  Tess, the owner, has such a distinct style and has decorated the store with such charm and character.  I so admire her bravery in opening her own business.  So much time and energy and work goes into something like that and I just think it rocks to have the balls to go out and do it!  She’s a total inspiration!   Photo 197 is Tess… in her new shop… on opening day.  Congrats Tess!  I was happy to be her very first customer and took home some Cabot Clothbound Cheddar, fresh local eggs, amazing thick-cut bacon and a container of Salvatore Bklyn Ricotta, which basically tastes like a mixture of butter and ricotta.  Ridic.

On Sunday we really just chilled at home – Adam’s previously-mentioned rib injury took a turn for the worse and he was in major pain for most of Saturday afternoon and all day Sunday.  I was contemplating a trip to the emergency room, but we decided he should just take it easy and see if the pain subsided with rest, which fortunately, it has.

In the early evening, I left him at home – lying on the couch and recouperating and I headed to Brooklyn once again for Jess’s birthday drinks!  We went to Floyd – on Atlantic Avenue, which was a cool spot with a Bocce court.  Anyway – here is photo 198, taken at Floyd.

Tonight I’m using the rest of my bacon in a delicious Chicken Marsala recipe from Cooks Illustrated.  I love this recipe – it comes out quite sophisticated and the sauce is wonderful over rice!  This dish actually made Adam like mushrooms – which he hated when we first met.  The recipe calls for pancetta, but I have bacon in my house more often then pancetta and I think the substitution works just fine.  Here is the recipe – try it out!  You will be pleased with the results… I promise!

That’s all for today!  See you tomorrow. 🙂