My Weekend Home With the Fam…

By nell's dish March 29, 2011 children photography color filters lens flare Photography Project 365
Whew!  It’s been a while!  I had a difficult time blogging these past several days while I was away.  I left in such a rush that I forgot the cord to my card reader (for uploading photos to my computer) and I forgot the end piece for plugging my laptop in for charging.  Yeesh.  My mind was elsewhere evidently.  But I have still been taking pictures every day!  Let’s get right to it.
Photo 348 out of 365 – “Keeping Dry in the Corner Shop Cafe”

I tried this one several times last Wednesday and never quite got what I wanted.  My intention was to use an aperture which enables you to see clearly that there are people walking outside with umbrellas.  At the same time, I didn’t want the scene outside to distract too much from the wording on the window.  I also wanted to catch a nicer umbrella!  I waited and waited but almost everyone in Manhattan seemed to be carrying black umbrellas (typical) – here I caught a pale yellow one – not the best but more interesting then black I guess.

This was our awesome gift to my nephew Zach for his fifth birthday.  It is a Razor scooter and it’s wheels light up AND it shoots sparks out the back.  He wanted this SOOO bad and was beyond excited when he got to open it on Thursday night when I arrived in New Hampshire.  “Auntie Nell!  Auntie Nell!  Will you come outside and watch me??” – he was so enthusiastic.  So, despite the snow and the cold and the dark, we went outside so he could show me his scooting skills.  He was doing little jumps and he wiped out twice, but got right back up again unscathed.  I totally think he’s going be a little skater dude.

I took this Friday before I left New Hampshire.  We were playing around with the camera and my color filters.  Monique and I did a little series with the filters… we picked a color filter and then she made a face that represented how that color made her feel.  Here is the series:

Purple = I don't exactly know what this was. 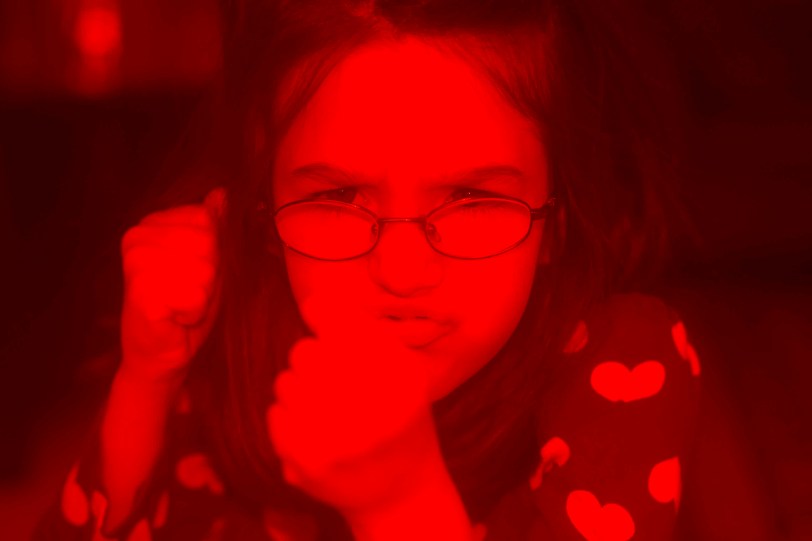 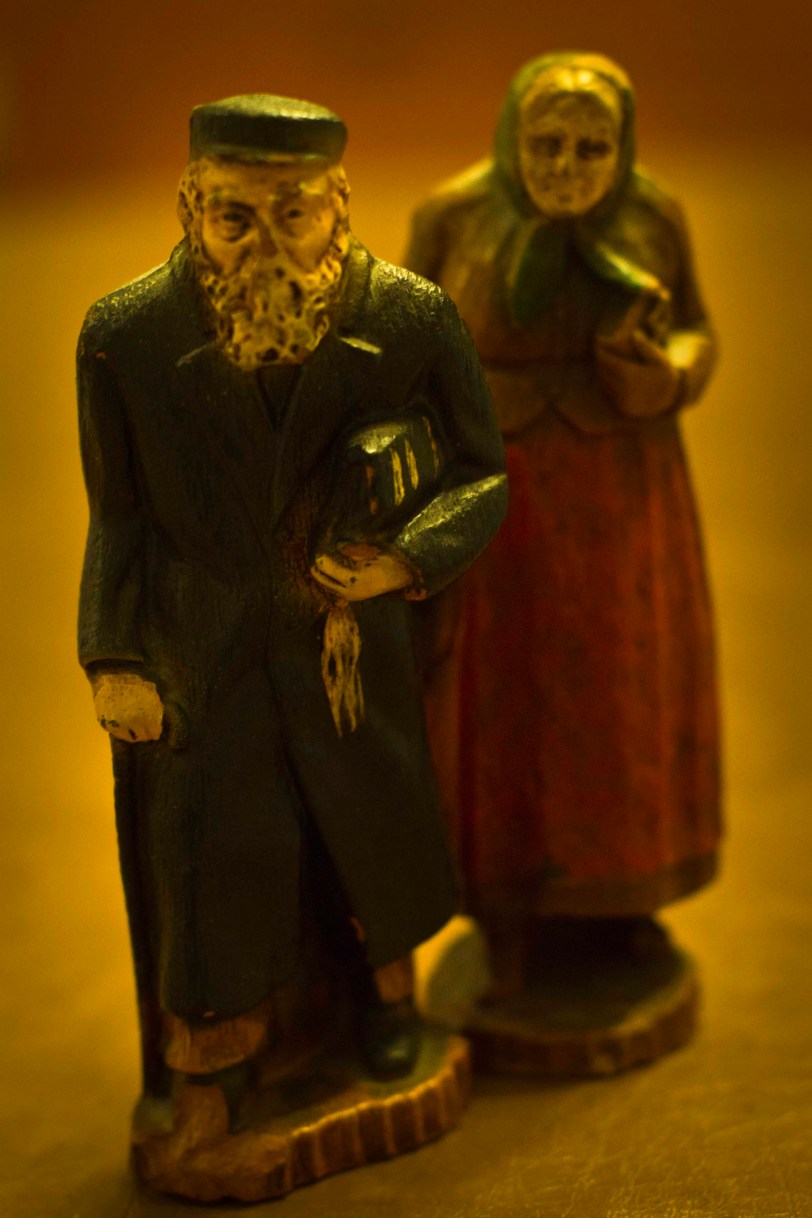 On Saturday I spent the early part of the day at the dentist (AKA – my dad), getting some impressions made.  Then my mom and I were off to the mall for some mother/daughter shopping time (our favorite).  Not so inspiring with the camera however – so it was later that night after dinner when I realized I hadn’t taken any pictures yet that day.  There are a few shelves in my parents’ living room over the fireplace that hold photo albums, candlesticks and all sorts of interesting knickknacks.  That was the first place I went for inspiration.  I remember these wooden carvings of a little old Jewish couple from when I was younger.  I guess I always had a thing for old people – because they were always sort of appealing to me.

Sunday we celebrated my grandfather’s ninety-first birthday with a delicious lunch at the Wayside Inn.  The Wayside Inn is the oldest running inn in America – since 1716.  George Washington is said to have stayed there.  It’s also supposedly haunted in two of the rooms.  Fun!  I had a hotel haunting once… but that’s a story for another day.

Anyway, this here is a picture of my grandfather (Papa) and my mom.  They’ve both got those blue eyes… the “Schneider eyes”. Too bad I didn’t get those!  My grandfather is looking pretty dapper for ninety-one – don’t you think?  He’s quite amazing actually.  He was blown away by his gift from all of us – a brand new Nikon Coolpix P500.  My dad spent some time with him yesterday learning how to use it.  I’m proud of him for being brave and having an open mind… I’m sure entering the digital age at age ninety-one is a bit overwhelming.

I got back into town on Sunday night and got to see my husband for the first time in a week!  We ordered Westville – our usual Sunday night comfort go-to.  I’ve switched it up lately though in the effort to keep on the health kick.  Instead of my usual turkey burger with cheese, which I like to douse in hot buffalo sauce (YUM), I got the simple lemon grilled chicken with a side of asparagus and a side of mushrooms.  Patting myself on the back as I type.  🙂

As a matter of fact, at this very moment I’m cooking up a veggie soup from all the leftover veggies in my fridge.  I want to use everything up before we leave on Saturday so I threw in some carrots, onions, celery, parsnip, red pepper and garlic and we’ll see what happens!  I usually follow a recipe – at least a little bit – but I’m totally winging it this time.  I’ll let you know how it turns out. 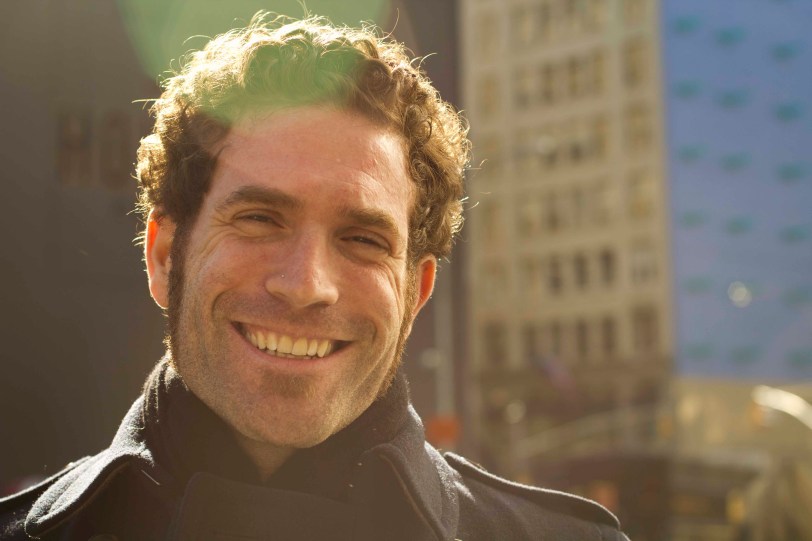 I took some pictures of Rob yesterday for my portraiture class homework.  I was supposed to be playing around with light intensity and direction as well as white balance.  With this picture, I was aiming for the backlit glow and there’s a little bounced light coming off the building next to us which is lighting up the side of his face.  I like this look… love the lens flare.  As for white balance, I decided to make this picture warmer (yellower) because it emphasized the feel of the sunshine.  Rob’s so cute.

So that’s all for today.  At four I’m going to a workshop at Adorama teaching me techniques for using my camera for filming instead of stills.  Should be rather informative.  I still think it would be awesome to be Adam’s cinematographer one day on a project – right?  So better get on that.  🙂

7 thoughts on “My Weekend Home With the Fam…”