“The days are long but the years are short”

This is a quote from a book I’ve been reading called The Happiness Project by Gretchen Ruben.  It is one of the four splendid truths she uncovers during her year-long quest to find her inner happiness and make herself an overall better/happier person.  I haven’t finished the book yet, but I’m enjoying it very much so far and it’s a thoroughly appropriate read for where I am in my life right now. I’ll write more about it once I’ve finished.

Meanwhile, though I believe that quote has so much truth to it, lately, my days have NOT been long!  They’re just flying right by like crazy – hence my lack of blogging.  So – please forgive my absence.  Here’s what’s been going on the past couple weeks – the condensed version:

I had some friends over and did a little experimenting with Mindy Fox’s roast chicken cookbook myself.  Last time my friend Amie made the chicken and it was FABULOUS!  So I pretty much wanted to recreate her success.  The menu was as follows:

Everything came out wonderful!  I can’t wait to try out some more of her roast chicken recipes.  The  next on my list is Peruvian Roast Chicken with Avocado Salad.  Mmmmmmmm.

Last Tuesday I worked with a small team from Bodega (Adam’s company) to shoot a music video for Jones Street Station‘s new track “The Understanding” (click for free download).  This was actually quite exciting.  The video stars Danny Pudi from the NBC show Community.   Here I am with Danny Pudi and Joel McHale (ran into him on the street while shooting nearby – NBC upfront in town) 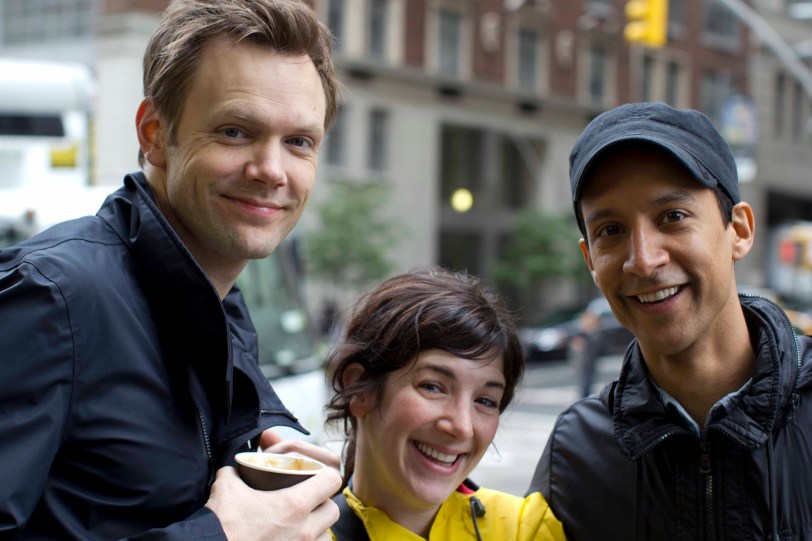 Yes - I look like a nerd. But I was excited to be sandwiched between these two.

I’ve also been doing some Brooklyn apartment hunting.  I’ve seen about six apartments in the last couple weeks – none of which feel right… oh Brooklyn brownstone on a majestic tree-lined street… why do you elude me so?  Two of the apartments I saw last week didn’t have doors to any of the “two bedrooms” they boasted.  One of them didn’t even have a sink in the one bathroom.  And of course these apartments cost thousands of dollars a month.  Insanity!  However, now that we’re going month to month in our current apartment, I feel much more relaxed and comfortable with the fact that we’ll just wait until we find the right thing.  But this is what I’m talking about… ahhhhhh.

Last Thursday I helped my friend Beck shoot some tests for an amazing new stop-motion music video she’s putting together.  It was so cool to see the process that goes into stop-motion.  It’s kind of magic.

Then Friday we flew off to Jacksonville, FL for the weekend to celebrate the twenty-five year marriage anniversary (and vow renewal) of some very dear friends/extended family of ours.  Turns out… a weekend away with loved ones was EXACTLY the kind of breather we needed!  Because during all of this we’ve been preparing for…

THE OFFICIAL OPENING OF HELLO LONESOME IN NYC THIS FRIDAY 5/27!!

Yes, that’s right – Adam’s film is opening at the Cinema Village theater this Friday night where it will run for a week.  If you live in NYC, you should totally come!!  You can buy tickets online right HERE!  Check it out – on the Marquee!  So exciting!

Oh – and if that’s not enough, we got contacted by Jdate, because they’re in love with the short film Adam surprised me with at our rehearsal dinner and they want to use it for a national television commercial!  Craziness.  Many of you have seen it already – but it’s so special so I’ll post it again for you in case you haven’t seen it.

So that’s been my world since we last met.  I felt a void not blogging over the past two weeks so I’m going to try to carve out some morning time for myself so I can make it more of a regular thing again.  I missed sharing with all of you!