Making a Movie is Hard

We are overjoyed this morning as we head into the opening night of Hello Lonesome in New York City.  In the last twenty-four hours, several positive reviews of the movie have been published – including a somewhat glowing review from our very own The New York Times.  It is everything we were hoping for.

But the ride has been a wild one to say the least – and now seems like the perfect time to tell you the whole story.

It began just about a year ago at our World Premier in Los Angeles as part of the Los Angeles Film Festival.  Leading up to our premier we heard good things about how Hello Lonesome was being received.  There was a press screening earlier in the week and we were told the turnout was great and the film was generating a lot of buzz.  We were psyched (and really nervous).

Then the night of the premier arrived – our screening was sold out!  Friends, relatives, cast, crew – lots of Los Angelans (?) filled the theater as Adam conducted interviews with the press.  It was thrilling and overwhelming.  The movie played great that first night!  We sat in the theater squeezing each other’s hands as the audience laughed and cried at all the right moments.  It was really happening.

When the movie ended we all celebrated as we headed to the after party we had organized.  About twenty minutes into the party our friend Mark came up to me and told me quietly … “the Variety review came out – it’s terrible.  Adam read it on his phone.”  My heart sank.  Those ass holes.  I looked over at Adam, who was putting on a happy face but I knew he was crushed.  Our first review from a major publication and they hated it.  Among the nasty things Robert Kohler wrote in his review was this:

“A useful object lesson for student filmmakers on what not to do … otherwise a dud for fests and potential buyers.” – Robert Kohler – Variety

The next morning the Hollywood Reporter review came out.  Kirk Honeycutt hated it too:

“The film is the kind of downer only a festival programmer would love” … “Reid apparently didn’t trust his script — or his actors — to let things speak for themselves.”
– Kirk Honeycutt – Hollywood Reporter

LA Weekly followed suit with some snarky and dismissive remarks by Karina Longworth:

“The fatally slight, student-quality triptych Hello Lonesome would seem to be the kind of vapid American indie that the foreign discoveries should have shoved out of contention.”
– Karina Longworth – LA Weekly

So there it was – where previously riding high, we were now pretty much knocked on our asses.  And that was only the beginning of a full week of screenings and interviews.  It was really hard.

But then things started to look up.  Because of highly sold shows, LAFF added an additional screening of the film.  Then, we got a text from one of the festival organizers telling us to make sure we came to the festival awards ceremony.  OMG… there were only two awards given out to narrative features at the festival.  One was “Best Narrative Feature”, which came with a whopping $50,000 prize.  The other was “Best Performance in a Narrative Feature” – which came with no monetary prize – but is hugely positive for the Director and for the Actor who receives it.  We spent that evening freaking out – wondering what our fate would bring the next day.

The next morning arrived (after a restless night’s sleep) and with it, came Hello Lonesome‘s very first Jury Prize – given to the entire cast of the film – “Best Ensemble Performance in a Narrative Feature”.  No $50,000 prize but just as sweet (almost)… validation.  The movie doesn’t suck.  People appreciate it.  Those reviewers are not everything.  Whew.  What a whirlwind.

After LA, it was mostly good vibes for Hello Lonesome as we traveled around to several festivals around the country picking up a bunch of awards!

Adam was also shortlisted for an Independent Spirit Award in the category of “One to Watch”.   A month later, we found out he didn’t get the nomination.  Up, down, up, down.
It’s impossible to know for sure, but chances are those negative reviews in LA significantly hurt our potential for distribution.  Thus, we decided to invest (with some generous help) in a NYC opening – throwing ourselves at the mercy of the New York press.  It was risky.  If it payed off, Adam would get a lot of positive attention, which would be great for his future career as a filmmaker.  If New York hated the film as well – we’d probably just move to a cabin the woods and hide for a couple years.
So begins this week.  On Tuesday we were disappointed to see two negative reviews from Time Out NY and The Village Voice.  Uhoh… was it happening again?  However, I have to say our skin was much thicker this time.  Our LA experience already knocked us down as far as we could go.  We were stronger this time around.  Plus – at this point we’ve screened the movie to hundreds of regular people, who connected deeply with it and praised it and cheered us on and became true fans.  And that means so much.
On Wednesday we were cheered up with a mostly positive Huffington Post Review – which concluded with:

“Shot simply, acted without fuss, Hello Lonesome is alternately funny, wistful, tragic and suspenseful. Reid does a lot with a little – and has crafted a small beauty of a film with his first try.”
– Marshall Fine – Huffington Post 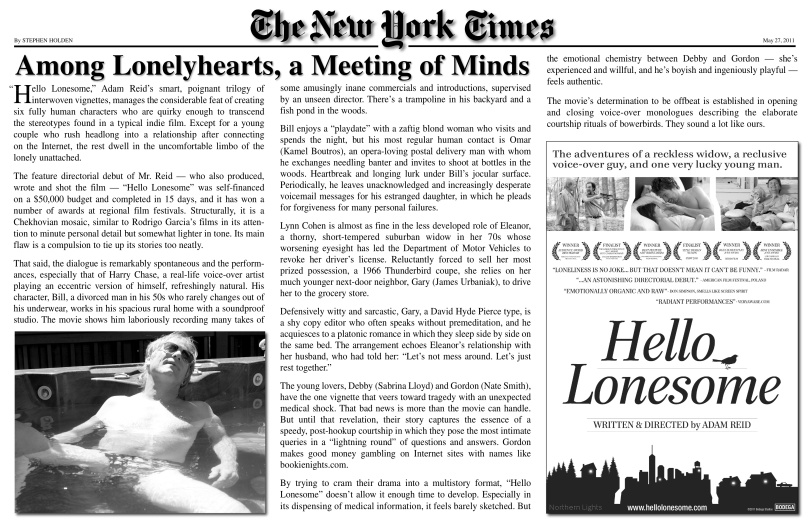 I breathed the deepest sigh of relief in my LIFE when I read the first sentence:

Stephen Holden gave Hello Lonesome a rating of four stars – out of five.  AMAZING!!!  We both cried a little.
Then it got better!
The Daily News Review came out mostly positive with Elizabeth Weitzman saying:

“Adam Reid’s offbeat debut suggests a talent worth watching”… “Reid has an eye for human connections, deftly zeroing in on the way people communicate — or don’t. He ends this conversation a bit too abruptly, but we’ll be listening the next time he’s got something to share.”
– Elizabeth Weitzman – NY Daily News

“The seeming randomness of the assorted human interactions in “Hello Lonesome” gradually becomes illuminating and just a little bit profound” … “First-time writer-director Adam Reid has a lightly endearing touch as he allows the actors plenty of space to be warm without being cute” … “Few films celebrate ordinary, nice people — or are as wise about why basic kindness matters.”
– Kyle Smith – NY Post

Then several others – mostly all positive!  Even the more negative ones were constructive and had quite a few positive things to say.
So here we are Friday morning … in a great frame of mind as we gear up for tonight.  This has been one of the most remarkable experiences of my life.  It has been filled with ups and downs, the highest of highs and the lowest of lows.  But through it all, we’ve been blessed with people who believed in Adam and his talent – people who supported us financially as well as emotionally.  People who have sat through the movie dozens of times – just to be there with us and to share in the experience.  Hello Lonesome would never be here if it wasn’t for the generosity of SO many people and that has been the greatest gift of all.
All of this has also occurred during our first year of marriage – and I’d say we’re all the stronger for it.  I have been so impressed with Adam as he has taken this all in stride.  Being beaten down, being celebrated – awards, public criticism.  Many people would lose it – would quit.  But he’s moved forward relentlessly – with humility and strength and an unwavering (most of the time) confidence and belief in himself that I find hugely inspiring.  I am so proud I could burst.   In year number one – I’m convinced, we make a pretty unstoppable team.

So thanks everyone – for coming along on the ride with us!  And stay tuned – as I think this is just the beginning.
~ xo

9 thoughts on “Making a Movie is Hard”